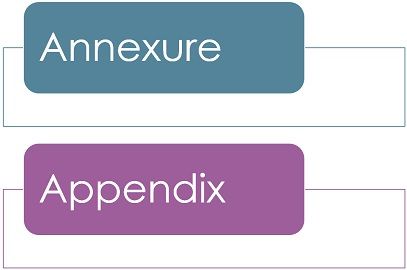 An appendix can be understood as that section added at the end of of the book or report which contains subsidiary matter relating to the main idea of document or book. It contains data which is not very essential to explain your findings, but it supports the analysis, assists the user to understand the research work and provides background material.

On the other hand, an annexure implies a set of legal documents or proofs which are attached to the main document, so as to confirm the details provided in the main body.

The basic difference between annexure and appendix is that while an annexure is an addition to the document, the appendix is an extension made at the end of the research work. Further, an appendix is much more concerned with the main document in comparison to an annexure.

Basically, an annexure can be used in a number of ways, depending upon the purpose and field in which it is used. It is a document which is attached to the main document, application, appeal, report etc. It provides pertinent information, related to the subject, but maybe beyond the context of the main document.

An appendix is a set of supplementary material created by the author, which is not a part of the main body, of the document and so it is placed at the end of the agreement or book. It contains such information that cannot be placed in the main document, however, its references are contained in the main document.

An appendix is used to expand the knowledge of the main text by furthering the information provided in the main documents. Hence, the information which is not very much relevant to your finding, however it backs the analysis, validates generalizations and strengthens the point, is covered in the appendix.

There are instances when a piece of supporting information is included in the main text of the book or report, but the full-fledged data set is given in the appendix. It includes illustrations, case studies, interview transcripts, letters, maps, tables, figures, charts, graphs, questionnaires, graphics, mathematical derivations, etc.

In other words, we can say that one can place any kind of data in an appendix, subject to it is relevant and directly related to the research topic, and proper references are provided in the main document. Further, there are certain points which must be considered while attaching an appendix to the book or report:

Key Differences Between Annexure and Appendix

The differences between annexure and appendix can be drawn clearly on the following grounds:

In a nutshell, appendix refers to the attachment to the document, which supplements it by providing additional reference information. As against, annexure refers to the additional documents or proofs provided with the main document.

Difference Between Footnote and Endnote

Difference Between Reference and Bibliography

Difference Between Citation and Reference

Difference Between Skimming and Scanning

Difference Between Summary and Paraphrase

Difference Between Voucher and Invoice