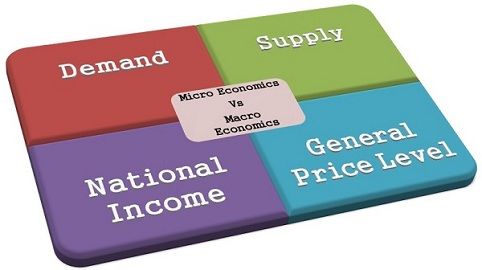 Micro Economics talks about the actions of an individual unit, i.e. an individual, firm, household, market, industry, etc. On the other hand, the Macro Economics studies the economy as a whole, i.e. it assesses not a single unit but the combination of all i.e. firms, households, nation, industries, market, etc.

Here, in the given article we’ve broken down the concept and all the important differences between microeconomics and macroeconomics, in tabular form, have a look.

Microeconomics is the branch of economics that concentrates on the behaviour and performance of the individual economic agents within the economy such as consumers, family, industry, firms, etc. It ascertains how the limited resources are allocated among various individuals to satisfy their wants? As well as it specifies the conditions for the best possible utilization of the resources, in order to attain maximum output and social welfare.

Here, the demand plays a key role in determining the quantity and the price of a product along with the price and quantity of related goods (complementary goods) and substitute products, so as to make a judicious decision regarding the allocation of scarce resources, concerning their alternative uses.

Microeconomics analyzes how individuals and households spend their income? How do people decide what amount to save for future contingencies? What set of goods and services best fulfils their needs and wants, in the limited income?

It also determines what products and how many products the firm should manufacture to sell? At what price the firm should offer its goods and services to the target audience? What sources of finance are to be used by the firm to commence or operate the business? How many and at what rate the workers are to be hired to work for the firm? When should the firm expand, downsize and close the business?

In macroeconomics, the entire economic phenomena or the overall economy is talked about. Basically, it focuses on the behaviour and performance of aggregate variables and those issues which affect the whole economy.

Further, macroeconomics not only discusses issues with which the economy goes through but also helps in resolving them, thereby enabling it to function efficiently.

The points given below explains the difference between micro and macro economics in detail:

Both are of the view that the nation’s economic welfare is possible only when there is the best possible utilization of productive resources. In this way, we can say that they are interdependent. Further, to have a full understanding of economics, the study of both the two branches is pertinent.

Micro and Macro Economics are neither different subjects, nor they are contradictory, rather, they are complementary. As every coin has two aspects – micro and macroeconomics are also the two aspects of the same coin, wherein one’s demerit is others merit and in this way, they cover the whole economy. The only important point which makes them different is the area of application.

Difference Between Micro and Macro Environment

Difference Between Economics and Finance

Difference Between Positive and Normative Economics