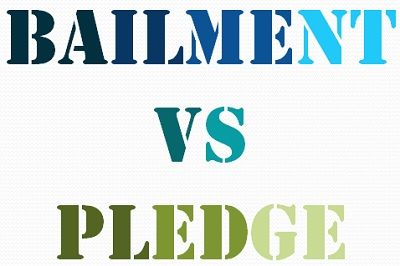 In simple terms, bailment refers to hand over or assignment the goods, which involves change in possession but not in the ownership of goods. It is the transfer of goods from one party to another party for some specific purpose. It is not same as pledge, which is just a variant of bailment. Pledge implies a contract, in which an article is delivered or say deposited with the money lender, as security for repayment of a debt owed by him/her or performance of promise.

When the purpose of delivering the goods is accomplished, the bailee should return the goods to its actual owner. Here the word goods may include all the movable items, but property and money do not come under the definition of goods. While the transfer of goods the ownership of goods remain with the bailor only the possession of goods transfers for a limited period.

The receiver of the goods should take good care of the goods as he takes care of his own goods as well as he should not use the goods without the permission of its owner except for the purpose specified. It is the duty of the bailor to tell the faults in the goods.

The delivery of goods can be done in three ways: Actual Delivery, Symbolic Delivery, Constructive Delivery. The Bailment is divided into two categories:

Example: Clothes given in laundry for cleaning are an example of bailment.

When the objective of the transferring the goods is completed or say when the payment for debt for which goods are pledged, is met, then the receiver shall return the goods to its real owner. However, if he fails to redeem the goods within a reasonable time, then the receiver has the right to sell the goods after giving a proper notice to its owner.

It is the duty of the Pawnee to take good care of the goods, as he takes care of his own goods as well as he should not use the goods without the permission of its owner. Moreover, the pawnor must tell the all the defects in the goods.

Example: Money taken as debt from the money lender by pledging gold as security against it is an example of Pledge.

Key Differences Between Bailment and Pledge

The following are the major differences between Bailment and Pledge

We all have no idea, when we enter into these type of contract in our life especially the contract of bailment because all of us has left our car or motorcycles in the service center for repairs, it is bailment. The pledge has a limited scope as compared to bailment; many businessmen take a loan from the financial institution by pledging their stock as security. In short, we can say that every pledge is a bailment, but every bailment is not a pledge. So, both of them are very important at their places and we must know their differences.

Difference Between Fraud and Misrepresentation

Difference Between Condition and Warranty