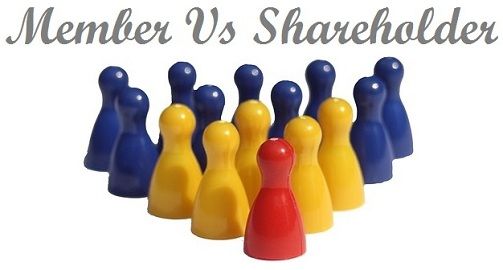 When we talk about a company, the terms shareholders and members are commonly used as synonyms, as one can become a member of the company, except by way of holding shares. In this way, a member is a shareholder and a shareholder is a member. The statement is true but not completely, as it is subject to certain exceptions, i.e. a person can become the holder of shares through transfer, but is not a member, until the transfer is entered in the register of members.

In the same way, the transferor of shares lacks shareholding but continues as a member, until entries are made in the company’s books regarding the transfer. Likewise, there are a few more points of difference between member and shareholder which are elaborated in the article in a detailed manner.

A person whose name is entered in the register of members of a company becomes a member of that company. The register includes every single detail about the member like name, address, occupation, date of becoming a member, etc. It also includes every person who holds company’s shares and whose name is entered as the beneficial owners in depository records.

How to become the member of a company

An individual who owns the share of a public or a private company is known as a ‘Shareholder.’ A subscriber of shares is not regarded as the shareholder until the shares are actually allotted to him.

The following are the rights of a shareholder:

Key Differences Between Members and Shareholders

The following are the differences between members and shareholders:

Members and Shareholders both are important persons of any company, whether it is public or a private limited company. We explained many differences between them, which makes it clear that how these two terms differentiate each other. However, a member can be a shareholder and in the same way, a  shareholder can also be a member subject to certain conditions has to be fulfilled for the same.