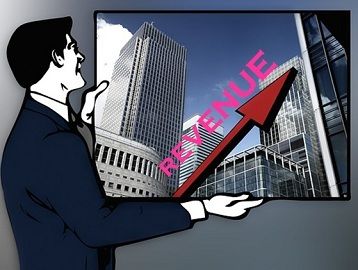 Revenue, profit and income, are three terms which sound same to a layman, although in business terminology there is a huge difference between them. Revenue implies the money received by the company from its day to day operations, alongwith the non-operating activities. On the other hand, profit implies the financial gain, which is arrived after deducting amount spent from the amount earned, by the concern, during the course of business in an accounting period.

Income can be understood as the actual earnings of the company, left over after subtracting all expenses, interest, dividend, taxes and losses. These are three major parts or say stages of money received in the business. First in the form of revenue, then we arrive at profit and lastly, it is the income remained with the company.

Take a read of this article excerpt, in which we’ve broken down all the important differences betwee revenue, profit and income.

In general, profit is the reward for the risk taken by the entrepreneur in the business. Profit is the net amount left (positive) after deducting all costs, expenses, and taxes from the revenue. Profit works as a tool in the calculation of tax of the enterprise. In simple words, the difference between the selling price of a product and its cost price is known as profit.

The net earnings of a company during a particular accounting year is known as Income. It gets calculated when the preferred stock dividend is deducted from the net profit of the business. It is the residual amount (positive) left with the company which can either be held by the company as retained earnings or distributed among the equity shareholders as the dividend. It can also be said that it is the net rise in the equity shareholder’s fund.

In the context of an individual, income is the total of the salary, rent, profit, interest and gains received from any source.

The difference between revenue, profit, and income can be drawn clearly on the following grounds:

Now, after discussing the three terms, it is quite clear that they do not contradict instead they arise one after other. The never ending business activity starts with the arrival of revenue from which profit is realized in the form of financial benefits to the company. After arriving at the profit, the preference dividend is reduced from it, which result in the net income of the company for a particular financial year.