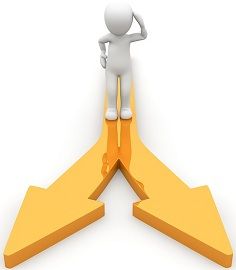 Economics is all about making choices, in order to make best possible use of the scarce resource. Whenever we make a choice among various alternatives, we have to forgo other options. In this context, two economic terms are often misconstrued, which are the trade-off and opportunity cost. While a trade-off denotes the option we give up, to obtain what we want.

Take a read of the article; that attempts to shed light on the differences between trade-off and opportunity cost.

In economics, trade-off means the exchange, in which a person sacrifices one or more things for getting a particular product, service or experience. It refers to all the courses of action which could be employed, other than the present one. It is a deal, that arises as a compromise, wherein to obtain a certain aspect we have to lose another aspect.

In other words, while making a selection, we have to accept less of something, for obtaining more of something else, the outcome would be trade-offs. For example: Suppose a company wants to start a project, which requires huge investment and other resources, so the trade-off entails the reduction in certain expenses, in order to invest more in the new project. Hence, tradeoff implies the way of forsaking one or more desirable alternatives, in return for obtaining a specified outcome.

As we know that resources are available to us, in a limited quantityr, but these resources have diverse uses, with varied returns. So, the resources are employed to the most productive use, by sacrificing the next best use of the resources. Hence, the opportunity cost is the amount of return that is expected to be generated when the resources are put to the second best alternative.

The opportunity cost of a course of action can be different for different individuals or entities, because it is determined by a person’s needs, wants, money and time. Therefore, what is valued more for an individual than any other thing, vary among individuals, while deciding the way in which resources are to be allocated.

The difference between trade-off and opportunity cost can be drawn clearly on the following grounds:

The concept of scarcity gave birth to the notion of trade-off and opportunity cost. These directly apply the principle of scarcity, as people have to decide, which one to choose among various alternatives while spending their time and money. The opportunity cost of choosing a project over the other, i.e. it is the alternative you must give up while making a choice. On the other hand, trade-off refers to all the other actions which we could be doing, apart from what we are doing.

Difference Between Scarcity and Shortage