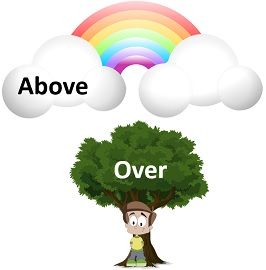 The words ‘above’ and ‘over’ are both prepositions and adverbs which are used to describe the position of any person or object and also when we discuss measurements, i.e. a level which is higher than another level on a scale. When something is above something else, i.e. the first thing is directly perpendicular to the latter, then we use over to indicate the position.

On the other hand, when the upper object is not in direct vertical line with the lower object, then we use the word above to describe the location of the object.

In these two sentences, you might have observed that the word ‘above’ is used to denote something upwards, i.e. at an extended space over. On the other hand, in the first sentence over denotes a situation or condition that has been placed, whereas in the second sentence over indicates something which is outrightly above one’s head.

The word ‘over’ can be used as a preposition and adverb, to talk about something that is at a higher level, as compared to something else. This means that when something is at a higher place covering any person or object and is directly perpendicular, we use the word over, i.e. it extends outrightly upwards from the person or the object.

Further, also denotes the movement of something at a higher position from one side to another. Read out the points given below to understand its usage:

Key Differences Between Above and Over

The difference between above and over can be drawn clearly on the following grounds:

Difference Between Across and Through