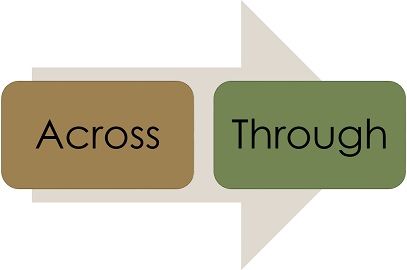 Prepositions can be described as the word that shows the direction and position of an object or person. Across and through are two most bewildering prepositions which can also be used as an adverb. Basically, they refer to the movement from one side to the other. Across, as the name suggests, it is used to talk about the transverse movement of a person or object. As against, through is used to denote a movement from one side of the passage, towards the other side.

At first instance, the two sentences often appear the same to us, but if you check their literal meaning, then you will understand the real difference between these two. In the first example, the word ‘through’ means by way of, whereas in the second example ‘across’ means side to side.

The word across can be used as both adverb and preposition. It refers to traversing from one side to another, of any place, field, road, etc, whose limits are apparent. It is used to explain the overall picture, wherein there is a straight path between the two ends, extending at a distance on the flat surface. The points below explains the usage of across, take a read:

Through means getting in from one end and out from the other end. It is the process of movement from one point to another, wherein the moving person or object is “in something”, in essence, the movement takes place in a hollow enclosed area wherein there are limits on top, bottom and sides, such as, long bushes, tunnel, doorway, crowd of people, forest, etc.

Key Differences Between Across and Through

The points given below are substantial so far as the difference between across and through are concerned:

The best way to remember the difference between across and through is that when we discuss, movement from one end to the other, but “in something”, such as a tunnel, window etc. then we use the word ‘through’. However, if space is open through which the object is passing, we use the word ‘across’.

Difference Between Above and Over

Difference Between Threw and Through

Difference Between Volume and Capacity