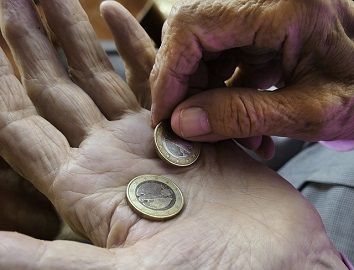 Poverty can be defined as the state in which an individual or household is not able to fulfil the minimum consumption needs. It is not always about money, but it also entails access to basic facilities such as proper hygiene, sanitation, food, shelter, drinking water, health, education, transport, whose absence as a whole, is regarded as poverty. It can be absolute poverty or relative poverty. Absolute poverty is when there is an absence of a minimum level of subsistence needed for the basic well being.

On the other hand, when poverty is measured in relative terms, such as income or consumption of other people, it is called relative poverty.

The word poverty line is often used in relation to poverty, which means an estimated minimum household income threshold, which is required to fulfil the basic necessities of life. Any person or family below this threshold is called as poor. This article will help you understand the difference between absolute and relative poverty.

Absolute poverty can be defined with the help of basic poverty line. When the income of the household is below the poverty line, then the person or family is regarded as poor. It indicates a failure in meeting the basic necessities of life (i.e. food, water, clothing and shelter) and access to the amenities like sanitation, education, medical care, information, etc., which is necessary for an individual’s physical and social well being.

The increase in the wealth of the society results in the increase in income of its members and resources they can afford, which changes the society’s standard of living and so relative poverty changes with time.

The difference between absolute and relative poverty can be drawn clearly on the below-given grounds:

In absolute poverty, people are considered as poor when they fall below the poverty line, whereas in relative poverty people who fall below the existing standard of living in society. So, absolute poverty describes the people who are deprived of the basic necessities of life, whereas, relative poverty, measures the difference in resources and inequality of income, in comparison to others.

Difference Between Cost of Living and Standard of Living

Difference Between Microcredit and Microfinance

Difference Between Absolute and Comparative Advantage