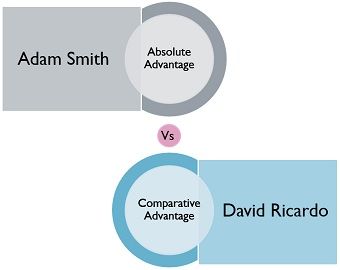 Due to the effect of globalization, one can enjoy Brazilian coffee, while living in the United States or go for a drive in a German car, on the roads of London. International trade helps the countries to expand their market and sell the goods and services across the boundaries of the country.

Mercantilism is the premier body of thought on international trade, introduced in the 17th and 18th century in Europe, wherein the mercantilist writers are of the view that the primary aim of the international trade is to promote favourable Balance of Trade. Here the favourable balance of trade refers to surplus trade between the countries, wherein the value of goods exported is greater than the goods imported.

Mercantilism theory was rebelled by Adam Smith and David Ricardo and propounded the theory of absolute advantage and comparative advantage respectively, which rely on the doctrine of free trade and specialization while producing such goods where inputs are adequate.

The theory of absolute cost advantage was coined by Adam Smith, in the late 17th century in his popular book “The Wealth of Nations“, opposing the Mercantilism approach which believed that trade is a zero-sum game.

In his theory, Smith argued that the nations gain through trading when they specialize as per their production superiority.

According to this theory, a country or business entity is said to have an absolute advantage over others when it can produce the highest number of goods, with the best quality using fewer resources, than another country or entity.

Resources Required to produce one unit of oranges and apples

With the above example, it might be clear to you due to the absence of trade both the countries produce both the fruits, but if there is a trade between these two countries then they need to produce the goods in which they specialize, i.e. they have an edge over the others. 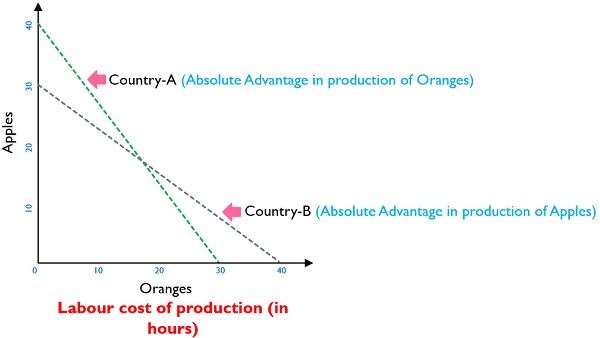 In the early 18th century, David Ricardo followed the ‘Theory of Absolute Cost Advantage given by Adam Smith’ and took it a step further, by emphasizing that cost advantage is not a mandatory condition for trade to take place, between two countries. This is because, the countries can still gain from international trade, even when one country is able to produce all the goods with less labour cost than another country.

In the book Principles of Political Economy, Ricardo indicated that it is beneficial for a nation to specialize in the production of those goods, which it can produce with maximum productivity, and minimum wasted effort and expense and to import those goods from other nations which it produces inefficiently.

According to his theory, a country or business entity is said to have a comparative advantage in the production of goods or services when it can produce/deliver that particular good or services at a comparatively lower opportunity cost than any other country. The opportunity cost as a determinant for analysis in making a choice amidst multiple options for production diversification.

It is used to gauge the efficiency of the countries in terms of relative magnitudes, as resources are limited and so they must go for producing those goods and services in which they possess a comparative advantage.

Production and Consumption without Trade

When the Country A is ready to exploit its comparative advantage in producing the wheat and increases the output from 20 units to 30 tons of wheat, which uses only 300 units of resources and 100 units of resources are still with the country which they can use in the production of pulses. At the same time, Country-B specializes in producing pulses and uses all of its resources to produce it and produces 16 tons of pulses. You can now notice that the overall output of both wheat and pulses have increased.

This proves that not only the output has increased, indeed both countries can now enjoy the benefits of trade.

Increase in Consumption after specialization and trade


Have a look at the graph below to understand the example in a better way: 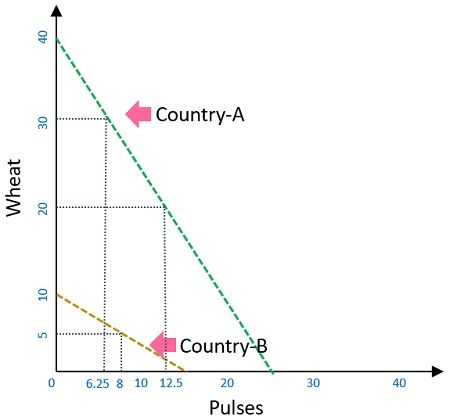 Hence, we can say that there is an overall increase in production and consumption due to trade and specialization.

The difference between absolute and comparative advantage are discussed hereunder:

Hence, the theory of comparative advantage makes it clear that trade is a positive-sum game and not a zero-sum game, wherein all the countries that participate in trade, are more or less benefitted through it.

Difference Between Absolute and Relative Poverty