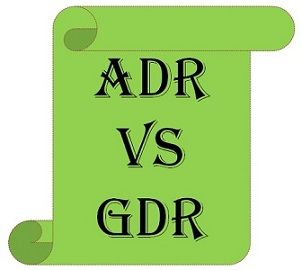 Depository Receipt is a mechanism through which a domestic company can raise finance from the international equity market. In this system, the shares of the company domiciled in one country are held by the depository i.e. Overseas Depository Bank, and issues claim against these shares. Such claims are known as Depository Receipts that are denominated in the convertible currency, mostly US$, but these can also be denominated in Euros. Now, these receipts are listed on the stock exchanges.

ADR and GDR are two depository receipt, that is traded in local stock exchange but represent a security issued by a foreign public listed company.

American Depository Receipt (ADR), is a negotiable certificate, issued by a US bank, denominated in US$ representing securities of a foreign company trading in the United States stock market. The receipts are a claim against the number of shares underlying. ADR’s are offered for sale to American investors. By way of ADR, the US investors can invest in non-US companies. The dividend is paid to the ADR holders, is in US dollars.

ADR’s are easily transferable, without any stamp duty. The transfer of ADR automatically transfers the number of shares underlying.

GDR or Global Depository Receipt is a negotiable instrument used to tap the financial markets of various countries with a single instrument. The receipts are issued by the depository bank, in more than one country representing a fixed number of shares in a foreign company. The holders of GDR can convert them into shares by surrendering the receipts to the bank.

Prior approval of Ministry of Finance and FIPB (Foreign Investment Promotion Board) is taken by the company planning for the issue of GDR.

Key Differences Between ADR and GDR

The important difference between ADR and GDR are indicated in the following points:

Many publicly listed companies in India, trades their shares through Bombay Stock Exchange or National Stock Exchange. Many companies want to trade their shares in overseas stock exchange. Although, the companies need to comply with some policies. In such a situation companies get itself listed through ADR or GDR. For this purpose, the company deposits its shares to the Overseas Depository Bank (ODB) and the bank issues receipts in exchange for shares. Now, every single receipt consists of a certain number of shares. These receipts are then listed on the stock exchange and offered for sale to the foreign investors.

If a domestic company directly lists its shares on a stock exchange, then it must comply with the stringent disclosure and reporting requirements and should pay the listing fees. Depository receipt is an indirect route to enter and tap multiple markets or single foreign capital market. This is a part of the management strategy of most of the companies to get listed overseas, to raise funds, to establish the trading presence in foreign markets and to build brand equity.

Difference Between BSE and NSE

Difference Between NYSE and NASDAQ

Difference Between Nifty and Sensex

Difference Between NSDL and CDSL