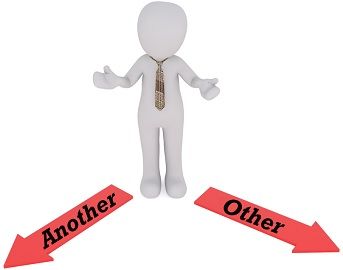 Another and other both come under the category of indefinite pronoun, that does not directly point out any other object or person. These are commonly juxtaposed, due to a little bit of similarity in their meanings. However, they are distinct in the sense that another means additional person or object, which can be similar to or different than the one you already have.

On the other hand, other also means extra or more, person or thing, except the one that you already stated, i.e. remaining. Read out the examples for a clear and better understanding of these two:

In the first sentence, another is used to mean one more, whereas other means different. In our next example, another means any other restaurant, than the one you usually go, while, other, means new or rest here.

The word ‘another’ implies an additional with respect to someone or something of the same type or a different one, as already specified or known.

‘Other’ is used to denote a person or thing apart from the one already specified or known. It may also refer to the second one of the two items or people. Sometimes, it also indicates the remaining item or thing in the set or group.

Key Differences Between Another and Other

The difference between another and other can be drawn clearly on the following grounds:

Difference Between Some and Any

Difference Between Each and Every