The cheque is just like a paper leaf, containing an order to the bank to pay the specified amount to the person whose name is stated on it. However, there is always a risk of dishonour of a cheque due to various reason, for which many entities prefer demand draft instead, as the payment is guaranteed.

A demand draft is an instrument issued by the bank in favour of the beneficiary and used for the transfer of money. But, again the person has to visit the bank branch to apply for the demand draft.

Banks are an integral part of our life, as millions of financial transaction take place daily, in which bank acts as an intermediary, like for depositing cash and valuables, withdrawal of cash, fund transfer, bill payment, ticket booking, purchase and sale of commodities, etc. For this purpose, various methods of payment are used, in which cheques and demand drafts are also included.

In this writeup, you will get to know about the differences between cheque and demand draft.

Cheque or check refers to the financial instrument, used for making payment to a party. It is drawn on a certain banker and is not expressly declared to be payable otherwise than on-demand. It has to be presented to the bank for payment, by the payee or holder of the instrument. It is valid for 3 months only.

Always remember cheque does not mean cash because it does not infer certainty of payment. Unless the cheque is not presented before the bank, within a reasonable time, proceeds cannot be realized. Further, the availability of funds in the account is a precondition for payment of the cheque. If sufficient funds are not present in the account, the cheque will be dishonoured.

What makes a cheque, a negotiable instrument?

The cheque is called as a negotiable instrument because it can be used in exchange for cash. Further, it can be negotiated by way of endorsement and its payment is made, on-demand. Further, when a cheque is payable to the bearer, it is negotiable through a mere hand delivery.

There are three parties to the cheque: 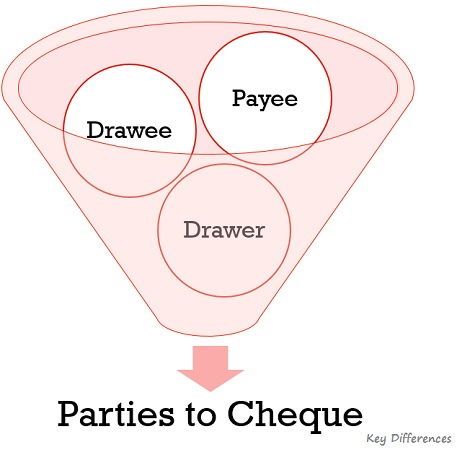 Also Read: Difference Between Cheque and Bill of Exchange

Demand Draft or DD can be understood as a prepaid financial instrument, in which the drawee bank is assumed to make the payment in full, whenever the DD is presented by the payee, to the bank for payment. It is issued by the bank in favour of the recipient to transfer money from one bank branch to another, located outside the city.

Here, the role of the drawee bank is like a guarantor, which assures the release of payment on presentment of the document or collect the money from his/her bank via clearing mechanism.

Further, it is not necessary that the person who applied for demand draft, should be an account holder of the bank, rather any person can fill the DD form, and pay the concerned charges either through cash or cheque, to get it. DD’s are generally used when one has to make payment in another city and it can be cleared at any branch of the same bank.

For example: SBI Kesarbagh Branch, Indore issues a demand draft to you for Rs. 12000 favouring ICAI payable at SBI, Kanpur. So, you have bought the demand draft from the bank by paying Rs. 12000, and the requisite fees (commission) to SBI Kesarbagh Branch. Now, you send the demand draft to the ICAI through speed post and ICAI can present the DD for collection to any branch of SBI in Kanpur, or have it collected through local clearing, to their concerned bankers.

In the case of demand draft there are two parties involved in it, stated as under: 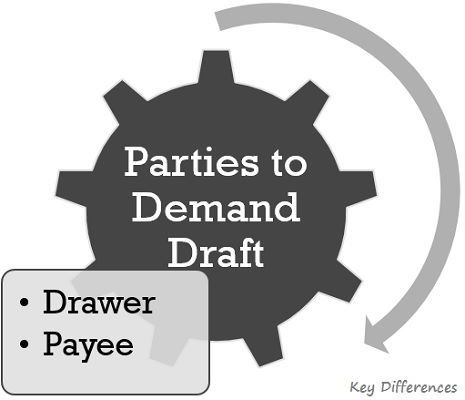 In demand draft, drawer and drawee are basically two different branches of the same bank, however, the payee is the third party, to whom the payment is to be made.

To understand the difference between cheque and demand draft in clearer terms, take a read of the points given below:

Contents of a Cheque

You can find the following details in a cheque

Basically, there are various types of cheques discussed hereunder: 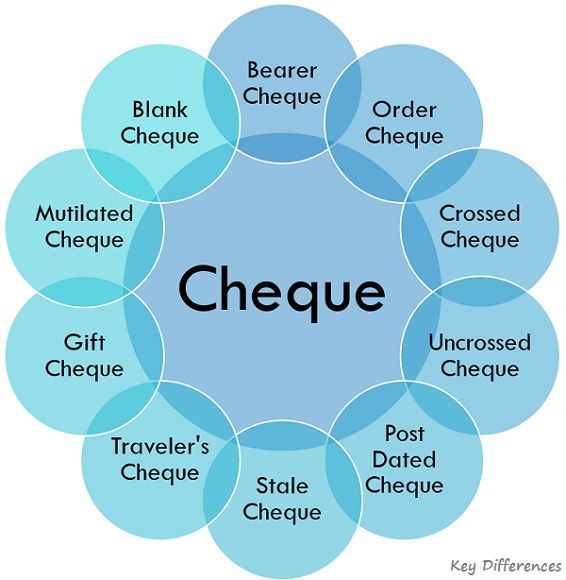 There are two types of demand draft:

Why are cheques dishonoured by banks?

A cheque is dishonoured due to the following reasons:

What happens if a cheque is dishonoured?

Dishonour of a cheque due to insufficient funds in the issuer’s account is regarded as a criminal offence. A ‘Cheque Return Memo‘ is issued by the drawee bank to the payee bank, signifying the cause for non-clearance of the cheque, which the payee’s bank gives to the payee along with the bounced cheque.

Now, the payee has two options – first to present the cheque before the bank again within 3 months from the date stated on the cheque, or to legally prosecute the drawer of the cheque.

If the payee continues with the first option, i.e. re-presents the cheque to the bank and the cheque gets dishonoured for the second time in a row, then he/she can file a suit against the drawer for the same, provided the reason for the amount for which the drawer is obligated to pay is related to certain debt or any other liability towards the payee.

Therefore, if the cheque is issued to the payee as a gift, or to lend money, he/she cannot sue the drawer, on those grounds.

What is a Crossed Demand Draft?

A demand draft carrying two transverse parallel lines on it is a crossed demand draft, which means that the amount mentioned on the DD, will be transferred to the account directly and not paid as cash. As per the RBI rules, demand drafts of ₹20,000/- and above are issued with account payee crossing.

What details need to be filled in a Demand Draft (DD) form?

To apply for a DD, one needs to fill the details in the relevant form, and submit it to the authorized officer. The details include:

So, both the instruments, cheque and demand drafts have their own uses and limitations. To deal with millions of transactions on a daily basis, one can avail the benefits of a cheque, which is easy and convenient to issue. Conversely, when the amount needs to be transferred from one place to the another or if it requires a guaranteed payment; demand draft is the best option to go for.

Difference Between Cheque and Bill of Exchange