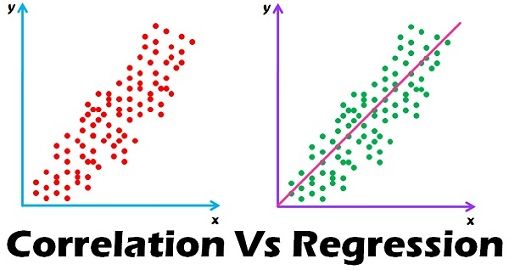 Correlation and Regression are the two analysis based on multivariate distribution. A multivariate distribution is described as a distribution of multiple variables. Correlation is described as the analysis which lets us know the association or the absence of the relationship between two variables ‘x’ and ‘y’. On the other end, Regression analysis, predicts the value of the dependent variable based on the known value of the independent variable, assuming that average mathematical relationship between two or more variables.

The difference between correlation and regression is one of the commonly asked questions in interviews. Moreover, many people suffer ambiguity in understanding these two. So, take a full read of this article to have a clear understanding on these two.

The term correlation is a combination of two words ‘Co’ (together) and relation (connection) between two quantities. Correlation is when, at the time of study of two variables, it is observed that a unit change in one variable is retaliated by an equivalent change in another variable, i.e. direct or indirect. Or else the variables are said to be uncorrelated when the movement in one variable does not amount to any movement in another variable in a specific direction. It is a statistical technique that represents the strength of the connection between pairs of variables.

Correlation can be positive or negative. When the two variables move in the same direction, i.e. an increase in one variable will result in the corresponding increase in another variable and vice versa, then the variables are considered to be positively correlated. For instance: profit and investment.

On the contrary, when the two variables move in different directions, in such a way that an increase in one variable will result in a decrease in another variable and vice versa, This situation is known as negative correlation. For instance: Price and demand of a product.

The measures of correlation are given as under:

A statistical technique for estimating the change in the metric dependent variable due to the change in one or more independent variables, based on the average mathematical relationship between two or more variables is known as regression. It plays a significant role in many human activities, as it is a powerful and flexible tool which used to forecast the past, present or future events on the basis of past or present events. For instance: On the basis of past records, a business’s future profit can be estimated.

In a simple linear regression, there are two variables x and y, wherein y depends on x or say influenced by x. Here y is called as dependent, or criterion variable and x is independent or predictor variable. The regression line of y on x is expressed as under:

where, a = constant,
b = regression coefficient,
In this equation, a and b are the two regression parameter.

Key Differences Between Correlation and Regression

The points given below, explains the difference between correlation and regression in detail:

With the above discussion, it is evident, that there is a big difference between these two mathematical concepts, although these two are studied together. Correlation is used when the researcher wants to know that whether the variables under study are correlated or not, if yes then what is the strength of their association. Pearson’s correlation coefficient is regarded as the best measure of correlation. In regression analysis, a functional relationship between two variables is established so as to make future projections on events.

Difference Between ANOVA and ANCOVA

Difference Between Discrete and Continuous Variable

Difference Between Covariance and Correlation