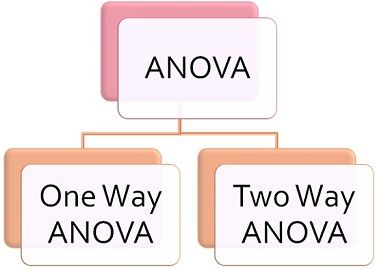 When it comes to research, in the field of business, economics, psychology, sociology, biology, etc. the Analysis of Variance, shortly known as ANOVA is an extremely important tool for analysis of data. It is a technique employed by the researcher to make a comparison between more than two populations and help in performing simultaneous tests. There is a two-fold purpose of ANOVA. In one way ANOVA the researcher takes only one factor.

As against, in the case of two-way ANOVA, the researcher investigates two factors concurrently. For a layman these two concepts of statistics are synonymous. However, there is a difference between one-way and two-way ANOVA.

One way Analysis of Variance (ANOVA) is a hypothesis test in which only one categorical variable or single factor is considered. It is a technique which enables us to make a comparison of means of three or more samples with the help of F-distribution. It is used to find out the difference among its different categories having several possible values.

The null hypothesis (H0) is the equality in all population means, while alternative hypothesis (H1) will be the difference in at least one mean.

One way ANOVA is based on the following assumptions:

Two-way ANOVA as its name signifies, is a hypothesis test wherein the classification of data is based on two factors. For instance, the two bases of classification for the sales made by the firm is first on the basis of sales by the different salesman and second by sales in the various regions. It is a statistical technique used by the researcher to compare several levels (condition) of the two independent variables involving multiple observations at each level.

The differences between one- way and two-way ANOVA can be drawn clearly on the following grounds:

Difference Between ANOVA and ANCOVA

Difference Between T-test and F-test