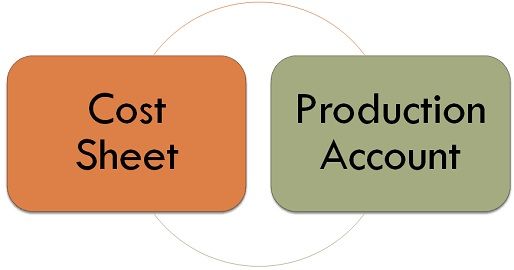 To determine the prices of products produced by the company, it is worthwhile for one to know the difference between cost sheet and production account. Cost sheet is a statement in which the details of expenses incurred on a particular product or job, during a specific period are presented. It is not exactly same as production account, which is nothing but an extended version of the statement of cost.

When the cost sheet is presented in the form of account, it is known as Production account, which not only provides for the cost of production but also includes the selling and distribution overheads sustained by the company.

While cost sheet can be prepared, as many times as the management of the company desires, production account can only be prepared, after the completion of the manufacturing process. Take a read of the article to understand some more distinguishing points amidst these two.

Cost sheet can be described as a statement of cost expended or to be expended, by the company in connection to the cost unit or cost centre, for a definite period or level of activity. It exhibits both cost per unit of production and total cost. Simply put, a cost sheet is a periodical statement, which accounts for the all the cost of a cost centre.

Cost sheet is a comprehensive statement, in which the cost components, i.e. prime cost, factory cost, production cost, the cost of goods sold, cost of sales, etc. are arranged rationally, under suitable heads. It aims at indicating the complete cost of the total output produced in a particular period. It is helpful in ascertaining the profit margin earned on the product, which in turn forms a basis for deciding the prices of similar goods.

Production Account is an account created under unit costing, which exhibit, the product produced, total cost of sales and the per unit cost incurred during the given period.

Production Account is something that integrates into itself, the components of cost sheet and the trading and profit and loss account. It not only includes the total cost of production but also accounts for the selling and distribution overheads.

There are three parts of a production account, in which the first part represents the cost of production, the second one shows the cost of goods sold and the last indicates the cost of sales, i.e. total cost.

The point provided below explain the important differences between cost sheet and production account:

Difference Between Statement of Affairs and Balance Sheet