In the simplest sense, deviance implies the ‘rule-breaking’ behaviour, especially the one which deviates from a socially or culturally accepted norm. Deviance is commonly juxtaposed with a crime, which is nothing but a public wrong.

Crime implies an illegal which is worthy of societal condemnation and punishment, because it not just harmful to an individual, but the public at large. There are various types of crimes such as – personal crimes, property crimes, victimless crimes, whitecollar crimes, juvenile delinquency, cybercrime, violation of public safety, etc.

With the progression of time, the rate of crime throughout the world has increased, resulting from various situations and causes. In this article, we will talk about the difference between deviance and crime.

Deviance can be understood as the divergence from those standards and norms which are widely accepted by society. It is a behaviour which is labelled as ‘abnormal’ by the people of the society. It covers a range of socially condemned behaviour – any type of conduct that evokes the social penalty, which can be a mild criticism or a capital punishment.

Put it another way, whether or not an act or behaviour is regarded as deviant, depends greatly on the way people look and label that act or behaviour. In essence, the deviance is decided on the basis of social setting or the context in which the deviance happens. Smoking in a public place is an example of deviance.

Further, the behaviour that is deemed as ‘deviant’ may change with time, i.e. with the development of society, its principles and norms are also modified. And so, what is called ‘deviant behaviour’ previously, may not be considered in future.

Norms are the rules which guide the members of the society about what is to be done and what should not be done in a particular situation. Whenever there is a deviation from these norms, it is called as deviance. Norms are of two types:

Crime refers to any unlawful act or negligence causing physical or psychological harm to someone, often forbidden and punishable by the statute. It is detrimental to the welfare of the public, or to the interest of the state and so, it is prosecuted by the state. The punishment for committing a crime can be fine or imprisonment or both.

In the commission of a crime four stages are involved:

Crime is the offensive act which breaks the statutory law, as well as it is strongly opposed by society.

The definition of crime varies from one country to another, however, there are certain acts which are considered a crime in all the countries of the world.

We all are aware of the fact that no person is criminal by birth. It is the circumstances and environment which make him/her perform a criminal act, prohibited by law. These causes can be social, economical, psychological or biological. These are discussed as under:

There are four elements of the crime: 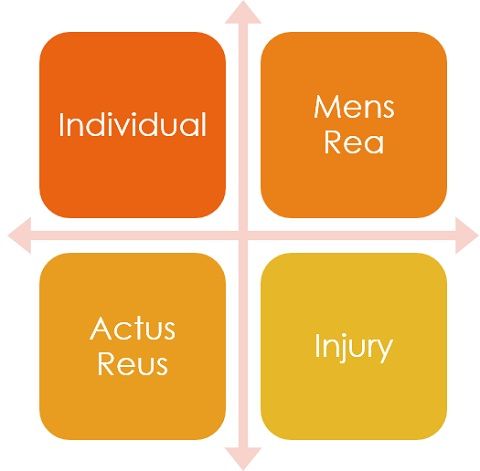 Key Differences Between Deviance and Crime

The differences between deviance and crime are discussed in the points below:

To sum up, deviance refers to the breaking of contextual, social and cultural norms and standards, by a person. On the contrary, crime refers to the offence which is against the law.