Factor Income refers to the income of means of production such as rent, wages, interest and profit, which accrues to land, labour, capital and entrepreneur, respectively. On the other hand, Transfer Income are the incomes which are not received by the person in the form of rewards for the services rendered, i.e. there is the transfer of money without the exchange of goods or services,

National Income is the summation of all factor incomes earned by the country’s residents during the period of the accounting year. It takes into account those incomes or payments which results in the flow of goods and services. Basically, there are two types of incomes (payments), i.e. factor income and transfer income.

Important: National Income is the aggregate of factor incomes, whereas transfer income is not added while estimating national income, as transfer incomes are not earned as rewards for providing services.

In this piece of writing, you will find the differences between factor income and transfer income.

Factor Incomes refers to the payments made by the production units(firms), to the owners of factors of production (households), for using factor services such as land, labour capital and entrepreneur.

Basically, factor income is generated when there is any productive activity and paid to the factors for the services provided in the production of current output. That is why it is an earned income and considered at the time of calculating national income. 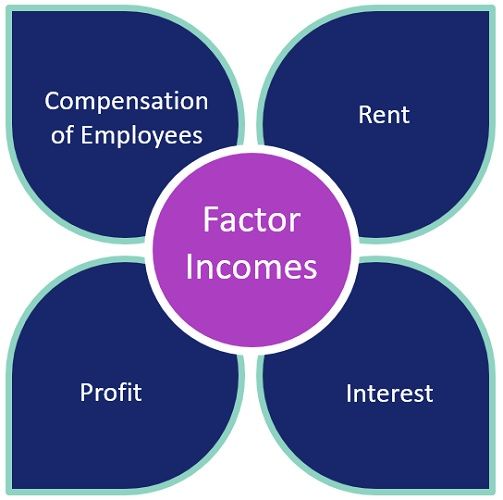 All the factor incomes are taken into account while calculating the national income due to the corresponding flow of goods and services.

Transfer Income implies the income received without any corresponding flow of goods and services, i.e. it is a unilateral payment. Hence, there is no sacrifice involved on the part of the recipient

It can be received by the individual as financial help, a gift in cash, a donation to a trust or NGO, unemployment allowance, pocket money to children, pension to elderly people, scholarship to the students, grant, etc. So, a person receiving a transfer payment does not take part in the process of production.

These are not earned as consideration or reward for the provision of services to the production units. This is the reason why these incomes are not included in the national income.

Important: It must be noted that, while wages to labour are included in national income, pensions to the retired workers are excluded from national income.

Transfer payment (income) can be current transfer or capital transfer. These are discussed hereunder:

Here, it is to be noted that no transfer be it current or capital, included while estimating the national income of the country.

After understanding the basic concept, let us understand the points of difference between factor income and transfer income: