Free Trade, as the name describes, is the unrestrained flow of products, services, labour and capital, across the country’s geographical boundaries, without any government intervention in the name of economic or regulatory barriers. The term ‘free trade’ is often contrasted with ‘fair trade’.

In the simplest sense, the word ‘fair trade‘ means the kind of buying and selling of goods and services in which fair, i.e. just and equitable, payment is made to the producers. It is an international-level social movement which composed of a myriad network of producers, companies, consumers, and organizations, whose purpose is to ameliorate the environmental and labour standards.

In this session, we will talk about the differences between free trade and fair trade.

Free Trade as the name suggests demands liberalization from the trade barriers in the international market. It is a policy, which states that the government does not differentiate against the imports or restrict export by levying taxes.

It lays emphasis on lifting restrictions, import taxes, i.e. tariffs, subsidies on exports, trade regulations, embargoes, and other non-tariff barriers which are imposed on the exchange of goods and services to/from foreign countries.

In other words, free trade refers to the full-fledged elimination of the trade barriers, to promote free movement of goods, services, labour and capital, globally. However, complete removal of barriers is theoretical, as practically government imposes certain measures to keep a check on imports and exports.

Fair Trade is mainly concerned with the impact of the trade on environment, labour standards and human rights overseas, so as to take steps to improve those effects.

Fair Trade refers to a trading arrangement formed on the basis of dialogue, openness and respect, which strives for higher fairness in the trade across the border.

Fair Trade aims at minimizing exploitation in the trade market, as well as reducing human rights violations and violations to environmental rules. It also empowers the farmers, artisans and small producers to support themselves. And to do so, the rights of people belonging to marginalized groups are protected by way of fair wages and better working conditions, which contributes to sustainable development.

Fair Trade helps the poor farmers, artisans and producers by providing fair and suitable price for their produce which covers the cost of production. It also allows them to get access to interest-free loans, or loans at the nominal interest rate. It ensures – fair prices, safe working conditions, conservation of natural resources and no enforced child labour. 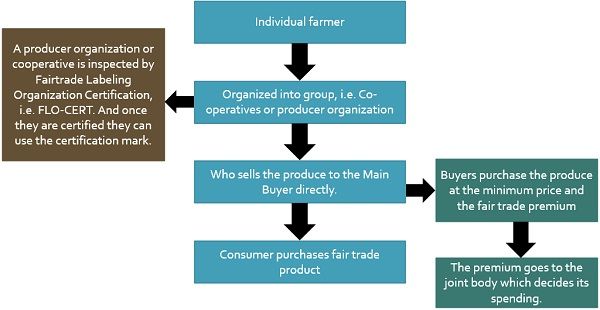 Many organizations across the world are associated with fair trade who actively stand up for the producers, raise awareness and carry out campaigns for implementing change in the existing trade rules and practices.

The points given below are substantial so far as the difference between free trade and fair trade is concerned:

By and large, free trade is a pact which says that the participating nations can import and export goods without any tariff barriers or other non-tariff barriers to trade. On the other hand, fair trade is all about fairness in price, working conditions, sustainability and terms of trade, with the working community.

Difference Between Tariff and Non-tariff Barriers

Difference Between Internationalization and Globalization

Difference Between Trade-off and Opportunity Cost