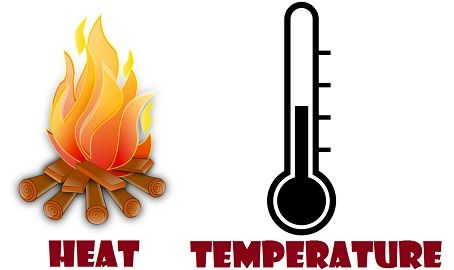 The concept of heat and temperature are studied together in science, which is somewhat related but not alike. The terms are very common, due to their wide usage in our day to day life. There exist a fine line which demarcates heat from temperature, in the sense that heat is thought of, as a form of energy, but the temperature is a measure of energy.

The heat of an object is the aggregate energy of all molecular movement inside the object. A form of energy that is transmitted from one object or source to another due to the differences in their temperature. It moves from a hotter object to the cooler one. Its measurement can be done in energy units, i.e. calorie or joules. The transfer of heat can take place in three ways, which are –

Temperature is defined as the average kinetic energy of all molecules together, i.e. average energy of all the particles in an object. As an average measurement, the temperature of a substance does not rely on its size (number of particles) and type. It identifies how hot or cold an object is, in degrees. It also measures, the speed of atoms and molecules of the substance.

It can be measured in various scales, which are – Kelvin, Celsius and Fahrenheit. The thermometer is used to gauge the temperature of the object.

Key Differences Between Heat and Temperature

The differences between heat and temperature can be drawn clearly on the following grounds:

Difference Between Boiling and Evaporation