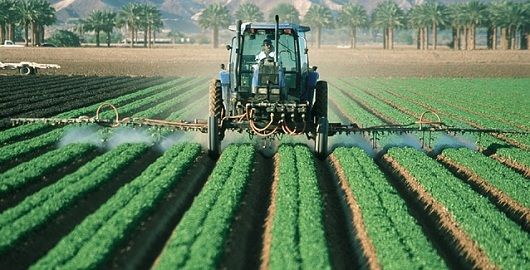 In contrast, Extensive Farming is one in which more and more land is brought under cultivation to increase the output produced. This article excerpt is presented to give a clear view of the difference between intensive and extensive farming, followed in different parts of the world.

Intensive farming refers to the intensification and mechanization of the agriculture, with the objective of increasing the productivity of a particular land. This is possible through the high-level use of inputs such as capital, labour, fertilizers, insecticides, pesticides, weedicides etc., which results in increased yield of the crop per hectare. In this system, the use of inputs is comparatively higher than the land area.

It can be applied in animal husbandry too, wherein a large number of cattle are reared in small space, as the law of the concerned jurisdiction allows. Further, medication for livestock is adopted to increase their productivity.

The essence of intensive farming is that it depends on the chemicals to accelerate the growth and increase the crop yield.

Extensive Farming is a system of cultivation, which uses limited inputs, i.e. labour, investment, machinery etc., in comparison to the land under cultivation.

In this method, traditional methods of farming are given preference. Further, the productivity is based on the natural fertility of soil, climate and terrain of the area and so it is practised in large farms to achieve higher yields and to achieve profitability. The total crop production is high, due to large land holding, but the low in terms of per unit production.

Due to less use of chemical fertilizers and pesticides, it is an environment-friendly method, as it does not damage the environment.

The points given below are substantial so far as the difference between intensive and extensive farming is concerned:

Difference Between Subsistence and Commercial Farming

Difference Between Extensive and Intensive Reading

Difference Between Mixed Cropping and Intercropping