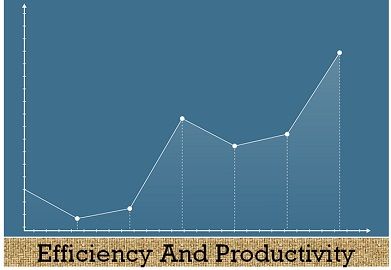 The success and failure of a business entity depend highly on how it performs in the market, which is based on three important factors, i.e. productivity, utilization and efficiency. One of the primary objective of all the organizations worldwide is to improve the productivity and efficiency. So, many misconstrue these two terms which are different in the sense that productivity is the ratio of outputs produced to inputs involved in the process of production.

On the other hand, efficiency is the ratio of the actual output produced to the standard output, that should have been produced, at a given amount of time with fewer resources. In this article excerpt, you will study the differences between productivity and efficiency, so have a look.

By the term productivity, we mean the measure, which helps in gauging the efficiency of an organization, person, machine, etc. in manufacturing or producing something. It can be measured by identifying the number of outputs produced with the given set of inputs. It ascertains, how effectively the resources are combined and used by the firm for getting a maximum possible outcome with available resources.

In other words, productivity is closely connected to the yield, i.e. the larger the yield, the higher would be the productivity of the organization. It can be calculated as under:

There are two types of Productivity:

Efficiency is used to mean a state of producing a maximum number of quality products with limited inputs, i.e. labour, money, material, time etc. It reflects the firm’s ability to achieve the best out of available resources, with no to minimum wastage of efforts and expenses. It can be calculated as:

Efficiency determines how well the output is produced, or objective is attained as planned with minimum costs. Simply put, it is always measured against a defined standard, in essence, the actual output produced will be compared with the standard output, in order to ascertain the efficiency in the production process.

Efficient firms target to reduce the unit cost of producing the product. And to achieve this, the firm looks for different ways to do the same thing, i.e. it may be changed in the production process, the material used, the time allowed, labour employed and so forth.

Key Differences Between Productivity and Efficiency

The difference between productivity and efficiency are discussed in the following points in detail:

To sum up, it can be said that efficiency is all about working smarter, to get more out of less. As against, productivity is nothing but increasing the overall yield, and this is possible by raising the performance level, to achieve greater results.

Difference Between Efficiency and Effectiveness

Difference Between Intensive and Extensive Farming