The level of productivity, in the production, determines the profitability, efficiency and performance of the enterprise, i.e. the higher the productivity of the firm the greater will be the earning capacity. It aims at determining the relationship between the input and output, in a particular production process. In short, it is nothing but attaining the highest possible outcome, while consuming minimum factors of production.

Productivity is often misconstrued with production, but there exists a difference, in the sense that production indicates the volume of output, whereas productivity is the output generated from the resources employed by the company. This article attempts to shed light on the differences between production and productivity.

Production can be defined as the systematic activity of gradually transforming one form of material into another while maintaining the requisite quality and are capable of satisfying human wants. It tends to combine, tangible inputs, i.e. raw materials, and intangible inputs, i.e. ideas, information, etc. to turn it into finished products for sale, through a mechanical or chemical process.

Productivity is a measure that gauges the efficiency of the production process, i.e. in transforming inputs such as raw material, labour, capital, etc. into the output of finished goods. It can be expressed in terms of the ratio of outputs produced to inputs consumed, in the given period.

Productivity tends to determine the overall production performance of the firms by ascertaining how efficiently the firm utilized its resources in the production of goods and services, with minimum wastage. It can be enhanced by controlling factors of production, improving process and technology. 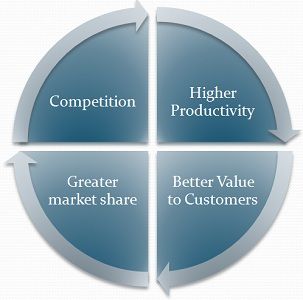 Competition triggers productivity, as intense competition results in higher productivity, which in turn provides better value to the customers, leading to higher share in the market. Further, it can be evaluated with the help of the following analysis:

Key Differences Between Production and Productivity

The difference between production and productivity can be drawn clearly on the following premises:

By and large, production and productivity are not contradicting terms, but these are closely connected one. Production is a conversion process, in which the firm is engaged, whereas productivity is all about how efficiently the company allocates its factors to produce the output, with least amount of wastage and essential quality. In short, the efficiency in production is the firm’s productivity.