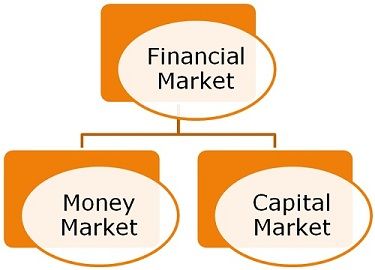 The financial market is a marketplace where investors deal in financial instruments. It provides a vehicle for allocation of savings to investment. It can be grouped as money market and capital market. Both the markets are very important in the financial sector. In the money market, extremely liquid financial instruments are traded, i.e. monetary instruments of short-term nature are dealt. On the contrary, the capital market is for long term securities. It is a market for those securities which have direct or indirect claims to capital.

Capital Market plays a crucial role in the development of the economy because it provides channels for mobilization of funds. On the other hand, money market possesses a range of operational features. The article presented to you explains the difference between money market and capital market in tabular form.

An unorganised arena of banks, financial institutions, bill brokers, money dealers, etc. wherein trading on short-term financial instruments is being concluded is known as Money Market. These markets are also known by the name wholesale market.

Trade Credit, Commercial Paper, Certificate of Deposit, Treasury Bills are some examples of the short-term debt instruments. They are highly liquid (cash equivalents) in nature, and that is why their redemption period is limited to one year. They provide a low return on investment, but they are quite safe trading instruments.

Money Market is an unsystematic market, and so the trading is done off the exchange, i.e. Over The Counter (OTC) between two parties by using phones, email, fax, online, etc. It plays a major role in the circulation of short-term funds in the economy. It helps the industries to fulfil their working capital requirement.

A type of financial market where the government or company securities are created and traded for the purpose of raising long-term finance to meet the capital requirement is known as Capital Market.

The securities which are traded include stocks, bonds, debentures, euro issues, etc. whose maturity period is not limited up to one year or sometimes the securities are irredeemable (no maturity). The market plays a revolutionary role in circulating the capital in the economy between the suppliers of money and the users. The Capital Market works under full control of Securities and Exchange Board to protect the interest of the investors.

The Capital Market includes both dealer market and auction market. It is broadly divided into two major categories: Primary Market and Secondary Market.

The following points are substantial, as far as the difference between money market and capital market is concerned:

The main aim of the financial market is to channelize the money between parties in which Money Market and Capital Market help by taking surplus money from the lenders and giving them to the borrower who needs it. Millions of transactions take place around the world on a daily basis.

Both of them work for the betterment of the global economy. They fulfil the long term and short term capital requirements of the individual, firms, corporate and government. They provide good returns which encourage investments.

Difference Between Bull and Bear Market