Normal loss is an unalienable loss, that occurs during the production process. These losses are immediately recorded in the books of accounts and apportioned over the remaining product units. On the other hand, any loss arising accidentally due to unforeseen events is termed as an abnormal loss. As these are considered as an expense to the company, the cost is not included in the cost of production.

Losses generally occur at the time of processing input during the process. Such losses arise because of issues in the operating environment, defects in raw materials, problems with machinery, evaporation, spoilage, shrinkage, etc. In case of losses, there can be three possibilities: 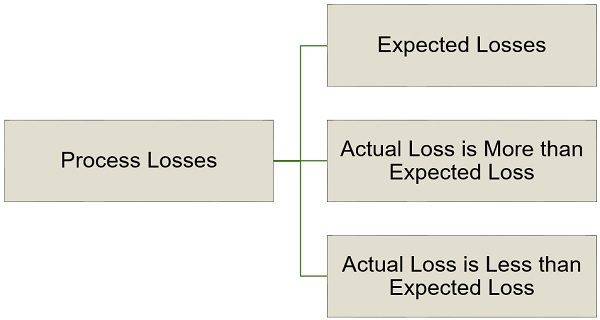 This content describes the difference between normal loss and abnormal loss.

Normal Loss refers to the loss that cannot be avoided due to the nature of raw material. There are instances when at the time of the production process some quantity of material is lost, which is named as spoiled units, shrinkage, rusting, or evaporation. However, when it happens on a regular basis, then the loss is regarded as a normal loss.

Such losses can neither be eliminated nor reduced, irrespective of the operating conditions. Prior to the starting of production, provision is generally made for such losses.

Normal Losses are not charged to closing work in progress, as they are deemed as a part of the cost of production. At the time of computation of equivalent units, normal losses are not considered and in this way, the cost of normal loss is instinctively apportioned to the total units produced, when it is subtracted from the cost of raw material.

Calculation of Cost of goods per unit

It is a loss that exceeds the anticipated margin for normal process loss.

Calculation of Cost of Abnormal Loss

After understanding the meaning, calculation, and format of the two types of process losses. We are going to talk about the difference between normal loss and abnormal loss:

What is Abnormal Gain?

There are a number of exceptional cases when the actual process loss is comparatively less than the expected loss. It is called abnormal gain. It is also known as effectiveness.

Calculation of Units of Abnormal Gain

Calculation of Cost of Abnormal Gain

Using the given information compute:

Identification of abnormal loss is quite important so that the company’s management has an idea of the extent to which the actual losses are not in line with the expected ones.