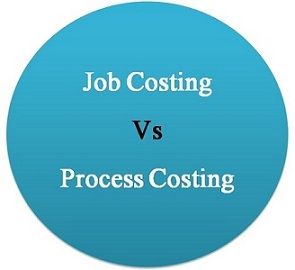 There are various cost accounting techniques used to measure the cost of the product. When the goods are produced only against special orders, job costing is used by firms. On the other hand, when a product passes through several processes or stages, the output of one process becomes the input of next process, and to determine the cost of each process, process costing method is applied. It is generally used when like units are to be manufactured, that too in a continuous flow.

In other words, the former is used to calculate the cost of jobs or contracts which are distinct in nature, while the latter used to compute the cost charged to each process. So, here in this article excerpt, we present all the differences between Job Costing and Process Costing, in a tabular form.

A method of costing in which cost of each ‘job’ is determined is known as Job Costing. Here job refers to a specific work or assignment or a contract where the work is performed according to the customer’s instructions and requirements. The output of each job consists of normally one or less of units. In this method, each job is considered as a distinct entity, for which cost is ascertained. Job Costing is applied when:

Job Costing is best suited for the industries where specialized products are manufactured as per customer needs and demands. Some examples of those industries are Furniture, Ship Building, Printing Press, Interior Decoration, etc.

A costing technique, which is used to calculate the cost of each process is known as Process Costing. Here process refers to a separate stage where production is performed to convert the raw material into an another identifiable form. Process Costing is used in the industry where identical products are produced in huge quantities.

In Process costing, the plant is divided into some processes where the production is performed either sequentially, parallelly or selectively. The output of the former process becomes the input of the latter process, and at the end, the output of the last process is the final product. The individual process account is prepared for each process.

Process Costing is best suited for large-scale production is done as well as where there are multiple levels of producing a product. Some example of such industries is steel, soap, paper, cold drink, paints, etc.

The following are the major differences between job costing and process costing:

There is no comparison between Job Costing and Process Costing because both the methods are used in different industries. Although, the differences exist in the two methods. One such difference is, each job requires a high degree of supervision and control, but the process does not require so, as they are standardized in nature.

Difference Between Joint Product and By-Product

Difference Between Costing and Cost Accounting

Difference Between Product and Process Layout