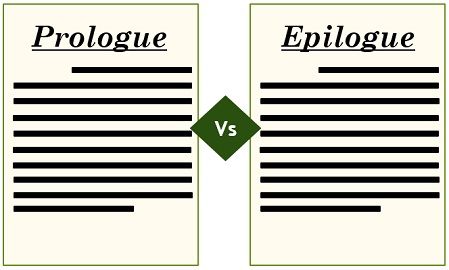 Prologue and Epilogue are two diametrically opposite literary devices used in the literary composition and stand outside the narrative. The prologue is one of those pages which is included in the front matter of the book. It helps in giving a sneak peek of the story to the reader, which is contained in the book. They are popularly known for preparing the reader for the story.

On the other end, an epilogue is a piece of writing found at the end of the literary work, which states about the after-life of the characters, when the story has completed. It tends to conclude the story, tie up the loose ends and give finishing touches to the story.

Apart from the above-discussed difference, there are some other differences between prologue and epilogue, which we are going to discuss in this content, have a look.

A prologue implies the brief introductory part of the literary work, i.e. story, play, drama, movie or poem, which introduces the theme and character to the reader. It initiates the context, so that the story may begin. It also provides background information to the reader, as to what has happened before the story actually starts.

Prologues may last up to one or more pages. It helps in conveying the information which is necessary for the reader to possess, before starting the reading of the book or watching the play or movie.

An exciting prologue often helps in drawing the attention of the audience. And to do so, authors usually choose an interesting part from the middle of the story, so as to make them wonder and read the story in full. Besides this, the author can also use a prologue to narrate a scene from the past, which is relevant to the story.

Further, it is to be noted that prologues are always in the third person, as it provides information to the audience from a different viewpoint.

An epilogue refers to a separate section at the end of the literary work, i.e. book, or drama, acting as a comment or conclusion of the story. More appropriately, it is an afterword, in which the author addresses the reader indirectly, to present the fate of the characters.

Further, like a prologue, an epilogue is also written in the third person, while the main story is in the first person.

An epilogue adds to the growth of the characters, i.e. it explains what happened with them in future. Also, it tends to wrap up the entire story and indicates some dots linking to the future, after the story has been completed.

It can also serve as a clue to the next edition of the literary work, such as an unresolved conflict or a new twist. It can also limit the possibility of the sequel. Additionally, it restates the importance or moral of the story to its audience, as well as answers any questions that the readers might have, after the story is complete.

An epilogue must not be lengthy, as a short and concise epilogue is preferable.

Key Differences Between Prologue and Epilogue

The points given below are significant so far as the difference between prologue and epilogue is concerned:

The prologue is used to provide additional information to the audience, which facilitates them to understand the plot better. On the contrary, the epilogue is presented after the story is complete, to add the final touch.

Difference Between Foreword and Preface

Difference Between Theme and Topic

Difference Between Novel and Book

Difference Between Fiction and Nonfiction

Difference Between Play and Drama

Difference Between Abstract and Introduction