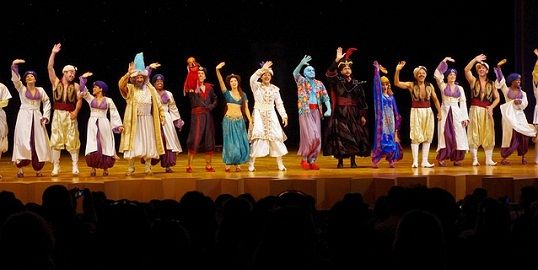 Drama is a genre of literature, which is basically the script, and the actors play the role of different characters to tell the story to the viewers and facilitate interpretation. It is often designed and developed for theatrical portrayal. Drama is one of the active forms of literature, which tends to inform, educate and entertain the audience at the same time.

Drama is often juxtaposed with a play. Play implies a piece of literature, which is written in single or multiple acts, consisting of different scenes in each act.

The primary difference between play and drama is that play is a dramatic performance on the stage, whereas drama is a literary composition in the form of prose or verse, that portrays dialogue showing conflict which the main character attempts to resolve.

Play can be understood as the dramatic work, characterised by direct interaction between the characters. It is designed for theatrical performance, which is arranged into dialogue, acts and scene. It is meant for a particular audience, i.e. it can be a stage play, screenplay or radio play.

The feelings, emotions and ideas of the writer are presented by way of characters. In order to increase the understanding of the viewers, the playwright makes use of various dramatic elements.

The main elements of a play are plot, characters, dialogue, setting, conflict and resolution. The pattern found in the plot of the play is – Rising Action, which is followed by a Climax, and finally, Falling Action takes place.

It is composed of a single act or a number of acts, wherein each act is further divided into the scene. In each scene, various characters come on or off the stage, so as to play their respective roles and speak their lines. In a play, the main character is the protagonist, while the opposing character is an antagonist.

Drama refers to a type of fictional or non-fictional work, often presented through performance and dialogue in a theatre, stage, radio or television, in the form of play, mime, opera, ballet, and so forth. It is a literary composition, written as prose or poetry, to act a story or to portray a character, having conflict, tension and various other types of emotions.

It is also otherwise referred to as ‘staged art’. It is a literary piece which is designed for a theatre performance, wherein the different characters are assigned the roles and they perform their respective roles when the action is presented on the stage.

The characters may include human beings, spiritual beings, animals, etc. There are four basic elements of drama – imitation, plot, action and dialogue.

Key Differences Between Play and Drama

Upcoming points will explain to you the differences between drama and play:

In a nutshell, the drama is a distinct and concrete genre of literature, that demonstrates life experience pragmatically to the viewers. On the other hand, a play is a subset of drama, which is used to represent actual or imaginary occurrences.

Difference Between Fiction and Nonfiction

Difference Between Novel and Book

Difference Between Theme and Topic

Difference Between Autobiography and Memoir