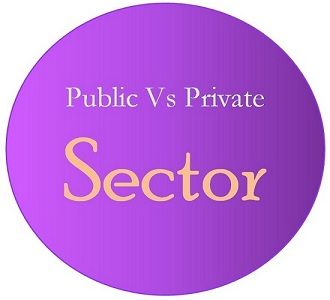 Gone are the days, when only the Public Sector was prevalent in the economy. At present, many countries have adopted the policy of Privatisation, through which Private Sector is also gaining importance. For the progress and development of any country, both the sectors must go hand in hand as only one sector cannot lead the country in the path of success. The private sector comprises of business which is owned, managed and controlled by individuals.

A cut-throat competition between both the sectors, to prove itself better over the other sector. So, the article attempts to outline the differences between public sector and the private sector in tabular form.

The sector, which is engaged in the activities of providing government goods and services to the general public is Public Sector. The enterprises, agencies, and bodies are fully owned, controlled and run by the Government whether it is central government, statement government or a local government.

There are two types of public sector organizations, i.e. either the Government fully finances them through the revenues they raise by collecting taxes, duties, fees, etc. or the government holds more than 51% of the total share capital of the company which comes under various ministries. The enterprises are established with service motive. It is the largest sector, which works for the upliftment of the people by providing the following services to the people:

The segment of a national economy that is owned, controlled and managed by private individuals or enterprises is known as Private Sector. The private sector companies are divided on the basis of sizes like small & medium enterprises and large enterprises which are either privately or publicly traded organizations. They can be created in two ways, i.e. either by the formation of a new enterprise or by the privatization of any Public Sector Enterprise.

Business entities of the private sector are generally established with the sole objective of making profit and building brand reputation. They provide quality services to the community to win the trust and goodwill from people to survive in the long run and compete with the enemies. These enterprises also have to follow the government law and order. It is the largest sector in terms of employees.

Although in private sector performance is the basic criterion for job stability, i.e. if you perform well you will get promoted and if you won’t, you will be terminated. The major services provided by the Private sector are as under:

The following are the major differences between public sector and private sector:

Nowadays, Private Sector is progressing faster because promotes quality, not quantity; it encourages talent. Public Sector is full of reservations like reservations for minority section, females, a person with a disability and much more, here nobody sees talent, it is completely ignored and because of this, competent youths remain unemployed.

Public sector enterprises give so many facilities to their employees, which makes them satisfied that their job is secured, due to which, all the people are running after it like it is a marathon. However in the Private Sector, your job is never secured, even if you give years to it, you can be fired anytime just because of a single mistake.

Again in the private sector, where performance is king, the workload is much, but it keeps you active, this is missing in the public sector due to which the work sometimes becomes monotonous which creates boredom. One thing is really good in Private Sector i.e. it is corruption free. In Public Sector, you have to pay lots of money to the government officers even for a simple work, for no reason. It is an unending debate, both are good at their places, if the drawbacks are removed, they will surely prove good for the economy.

Difference Between Industry and Sector

Difference Between Organised and Unorganised Sector