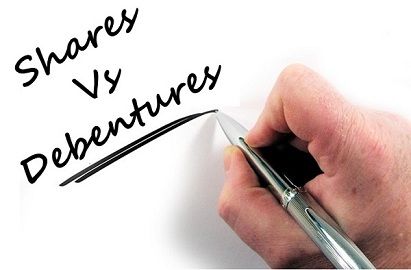 Nowadays, investment in shares and debentures has taken a dominant position in the society, as people of different ages, religion, sex, and race invest their hard earned money, with an aim of getting better returns. While Shares refers to the share capital of the company. It describes the right of the holder to the specified amount of the share capital of the company.

Conversely, debenture implies a long term instrument showing the debt of the company towards the external party. It yields a definite rate of interest, issued by the company, may or may not be secured against assets, i.e. stock.

So, if you are going to invest in any of the two securities, you should first understand their meaning. In this article, we have provided the difference between shares and debentures in tabular form.

The shares are movable i.e. transferable and consist of a distinctive number. The shares are broadly divided into two major categories:

Debentures are secured by a charge on assets, although unsecured debentures can also be issued. They do not carry voting rights. The debentures are of following types:

Key Differences Between Shares and Debentures

The following are the major differences between Shares and Debentures:

As everything has two aspects, shares and debentures also have its merits and demerits. While shares are give voting rights to the shareholders, debentures get priority in payment, at the time of winding up of the company.