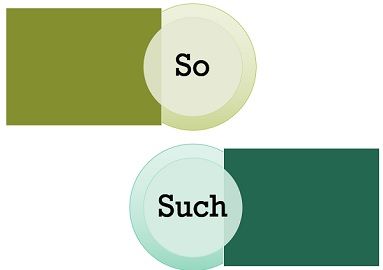 So and Such are the two words in the English language which are used to emphasize the meaning of the sentence. They are also used to mean ‘like this’. These words are not the same, because while ‘so‘ is used to indicate ‘the extent of something’, ‘such‘ is used to denote ‘of the aforementioned or certain kind or degree’. Let’s take a look at these examples to understand the difference between these two words deeply:

In these two examples you might have noticed, that while creating sentences with these two words, we’ve used the noun and adjective differently. In all the sentences the word ‘so’ is used to ‘make the meaning of the adjective stronger’. On the other hand, such is used to denote ‘of the particular type’.

Basically, the word ‘so’ is used to denote the extent of something, very or without any question. However, it is mainly used to lay emphasis. In English, it can be used in different contexts, hence, in different sentences, the meaning of ‘so’ can be different. Let’s take a look at the points given below to know its usage:

The term ‘such’ refers to ‘of a specific type or kind, which is either previously stated or about to be stated or implied’. But it is primarily used to put stress on something. It is added in sentences as a determiner, predeterminer and pronoun. It has a number of uses, which are discussed in the points given below:

Key Differences Between So and Such

The points given below explain the difference between so and such:


How to remember the difference