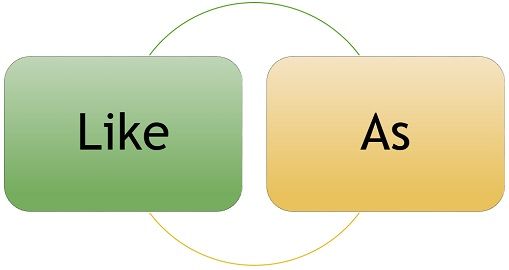 In English, the words like and as, are commonly interchanged and used synonymously. However, they are not similar in their meanings, as we use the word ‘like‘ to mean something we enjoy or prefer to do, or for someone you admire. On the other hand, the word ‘as‘ is used to refer to the occupation or character of a person.

Apart from these meaning, like and as can also refer to ‘in the same way’ which often confuses people with respect to their usage in sentences. Let’s look at the example to understand their difference:

The word like is used in the sentences for someone or something that we enjoy, admire or feel positive about. It also indicates similarity, i.e. when someone or something resembles another, we use the word like in the sentence. Either it is used as a preposition, and followed by a noun/pronoun, or it is used as a conjunction, where a clause comes after it. Now let’s discuss the uses of like:

Basically, ‘as’ is used to make a comparison, to indicate the extent or degree of an object or an individual. It may also refer to an individual’s function, job or qualities. Moreover, ‘as’ can also be used in the context of ‘in the same way that’. Now, let’s have a look at the given points to understand, how we can use it in our sentences:

The difference between like and as is presented in the points given below:

There are many differences between the two terms, specifically in their real meanings. Like means when we admire someone or something, whereas as reflects ‘in the role of’.