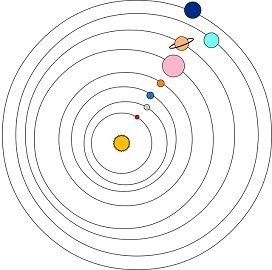 At night, when you look up high in the sky, you will notice trillions of shining dots, out of which some appear brighter, some are bigger while some of them twinkle. It is a point to ponder, what are these bright dots? So they are nothing but stars and planets. Stars are heavenly bodies that possess their own light and twinkle. They are fixed and large luminous body like the Sun.

On the flip side, planets are celestial objects, which have an apparent motion of their own and also moves around the star, in an elliptical orbit.

These two bodies might look alike, but as per science, there are huge differences between stars and planets, which we’ve simplified for you in this article in detail.

Stars can be understood as the glowing ball, consisting of plasma, clasped together by its gravity. Plasma is an intensely-heated state of matter. Stars are made up of gasses like hydrogen, helium and similar other light elements.

One important characteristic of the star is that they twinkle because as the light of star falls on the earth it passes through earth’s atmosphere and as a result of atmospheric refraction, they seem to twinkle.

The Sun is the closest star to the planet Earth, which is nearly 150 million km away. The distance of stars is expressed in light-years, i.e. the distance traveled by light per year. It seems moving from east to west.

The term ‘planet’ represents the heavenly objects that revolve around a star, in a definite path, i.e. orbit. It is huge enough that is occupies shape of a sphere by its gravity, but not as large to effect nuclear reaction. In addition to this, it has cleared other bodies in its neighboring area. Planets of our solar system, are divided into two parts:

Key Differences Between Stars and Planets

The points given below are noteworthy, so far as the difference between stars and planets is concerned:

Therefore, with the above discussion, you might have got the clear understanding on the differences between these two along with the reasons for differences. Whenever a new solar system is created, first of all, stars are formed, whereas planets are formed later on, within the orbit of the star.