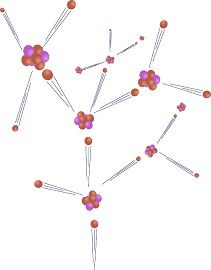 The process in which heavy nucleus is broken into tiny nuclei, is called as nuclear fission. On the other extreme, nuclear fusion is defined as the reaction wherein lighter atoms come together and form a heavy nucleus.

With the rapid industrialisation, our demand for energy is increasing in the same ratio, because of the change in the way we live and do our work, as we are greatly dependent on machines to do our work, which consumes energy. It implies the strength and power that we require to perform the physical or mental activity. It comes in various forms and is capable of being converted from one form to another.

We get energy from various conventional and non-conventional sources, which include solar energy, wind energy, tidal energy, geothermal energy and nuclear energy. Out of these energy sources, nuclear energy gives million times larger energy than the other sources. It liberates energy during nuclear fission and nuclear fusion reactions. These two reactions are often understood together, which most people juxtapose, but the difference between nuclear fission and nuclear fusion lies in their occurrence, temperature, the energy required or produced.

Nuclear fission is a process, wherein the nucleus of the large atoms like uranium or plutonium, is bombarded with the neutron of low-energy, breaks into small and lighter nuclei. In this process an enormous amount of energy is generated, as the mass of the nucleus (original), is slightly higher than the aggregate of the mass of its individual nuclei.

The energy liberated during the nuclear fission can be utilised in the production of steam, which in turn can be used to generate electricity. The nuclei formed during the reaction, are highly neutron-rich and unstable. These nuclei are radioactive, which continuously releases beta particles until each of them arrives at a stable end product.

Nuclear fusion implies a nuclear reaction, wherein two or more lighter nuclei fuse to create one heavy nucleus, which produces a tremendous amount of energy, such as hydrogen atoms fuse to form helium. In nuclear fusion, two positively charged nuclei integrates to form a larger nucleus. The mass of the nucleus formed is a bit lower than the aggregate of the masses of the individual nuclei.

In this process, a substantial amount of energy is required to force low energy atoms to fuse. Moreover, extreme conditions are required for this process to take place, i.e. higher degrees of temperature and high pascals of pressure. The source of energy to all stars including Sun is the fusion of hydrogen nuclei into helium.

The differences between nuclear fission and nuclear fusion can be drawn clearly on the following grounds:

Before the construction of nuclear power stations, nuclear energy was mainly used for destructive purposes only. Nuclear fission is the source of energy in a nuclear reactor, that helps in generation of electricity. At present, all the nuclear reactors, are used for commercial purposes are based on nuclear fission. However, nuclear fusion is also a safer method to produce energy. Further, the creation of high temperature for nuclear fusion is possible by exploding fission bomb.

Difference Between Atom and Molecule