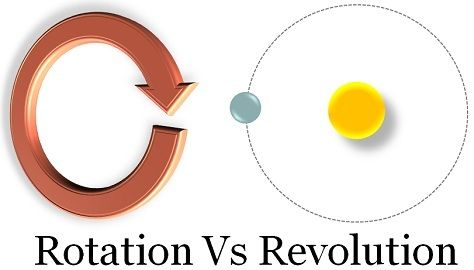 The motion along a curved path is termed as circular motion, like the orbital motion of planets, ice skater, blades of the fan, gears, amusement park rides, etc. The two fundamental concepts which are studied in circular motion are rotation and revolution. While rotation means the movement in a circle round an axis, revolution is when an object moves in a circular path around another object or center.

Many people often misinterpret these two concepts as they think that these two are same. But this is not so, as they differ from one another in the sense that rotation does not change the position of the object, but revolution does. So, here we’ve explained the difference between rotation and revolution in detail, take a read.

The term ‘rotation’ is defined as the movement of an object, in a circular manner, about a certain point, i.e. turn around, its own axis. There exist an imaginary line known as the rotational axis around which a three-dimensional object rotates.

In the rotation, every point makes a circle around the central point. So, there is an equal distance from the center to any point of the shape. It is expressed in terms of degrees, wherein when the rotation is performed clockwise, the degrees is negative, while an anticlockwise rotation, will result in positive degrees.

The most popular example of rotation is the earth’s rotation, which takes approximately 24 hours to complete it, causing day and night.

The term ‘revolution’ is used to describe a motion, wherein an object moves in a circular direction around an object or centre, in a fixed path or orbit. It involves travelling around an axis outside the object, i.e. external axis.

The revolution of the Earth around the Sun is in an anticlockwise manner, which takes 365 days and 6 hours to complete. It is the only reason for causing seasons to change.

Key Difference Between Rotation and Revolution

The difference between rotation and revolution can be drawn clearly on the following grounds:

Therefore, with the above discussion, you might have gained ample knowledge about the two terms, and will not get confused between them in future. While rotation means spinning around its own axis, revolution means moving around another object. Taking the example of the Earth, which rotates 366 times to complete one revolution around the Sun.