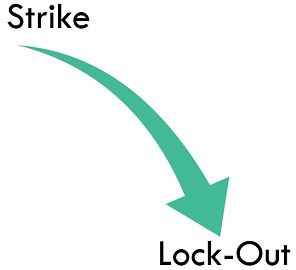 When the management refuses to accept the demands of the employees or workers, due to which they mutually decide to stop working, and proceed to strike. Workers used this as a last option when they don’t find any other way to convince the management, to agree to their demands.

Talking about the other way round, when the employers are looking for domination over the workers and impose their terms and conditions on them, they keep them out of the business premises and stop them from performing their job. This is what we call ‘lock-out‘.

Both Strikes and Lock-Out play a significant role in industrial relations, used as tools by the employees and employers respectively, in an attempt to safeguard their rights and interests.

In this written material you will find the differences between strike and lock-out.

Strike refers to a condition when one or more body of workers collectively stop the work for a temporary period while acting in mutual agreement so as to reach a certain end. It is organized with an aim of exerting pressure upon the management to fulfil their demands or express their grievances or support other workers, during the course of the dispute.

Strike means refusal to work, decided by the association of workers, to showcase protest, in order to get their demands fulfilled by the employer or gain concession. So, it involves:

A strike is a temporary combined withdrawal of labour from the work. Workers are free to use this tool, as a form of organized protest by standing outside the workplace, or occupying the workplace but denying to work. However, it does not imply termination of employer and employee relationship.

The strike is costly to the workers, as it may lead to loss of earnings, increased emotional tension, depletion in union funds and even loss of employment, in certain situations.

The different types of strikes are discussed hereunder: 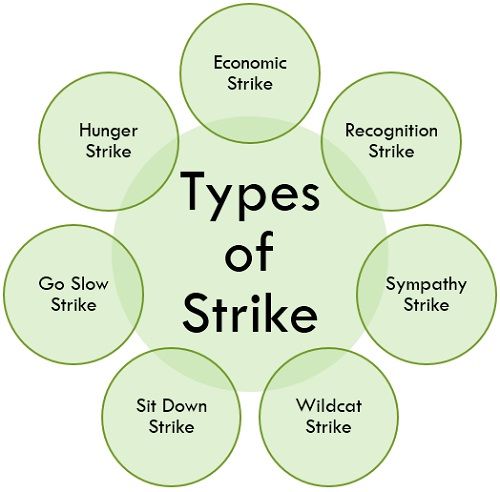 Lock-Out means the employer temporarily closes down the factory or any unit of the enterprise, where numerous workers are employed, to handle the uncontrollable situation, till the issues are resolved. It is used to compel the workers to agree and resume the work as per the terms and conditions of the employers.

It may result in a huge loss to both the parties, i.e. management and workers. In fact, frequent lock-outs may lead to the permanent shut down of the factory which leads to the loss of jobs on a large scale.

Lock-Out involves partial or full temporary locking down of the workplace or halting operations or denial by the employer to continue employment, of a certain number of employees with an aim of enforcing demands or showing grievance or to support other employers. It encompasses:

Also Read: Difference Between Lay-Off and Lock Out

Key Differences Between Strike and Lock-Out

So far we have understood the basic meaning of these two terms, now we will talk about the difference between strike and lockout:

Kingfisher Airlines is one of the finest examples, that suffered huge losses as it failed to compete in the aviation industry, as a result of which they were not able to pay salaries to their employees for six months, and the employees went on strike against the company, which resulted in more losses and partial lockout is declared by the company’s executives.

Basically, strikes and lock-outs are just methods resorted to by the workers and employers with an aim of settling their disputes, when they fail to settle them via peaceful negotiation. Lock-Out is not usually adopted by the management, rather it is usually announced when the workforce continue their strike, so as to prevent direct conflict between them.

Difference Between Organised and Unorganised Sector