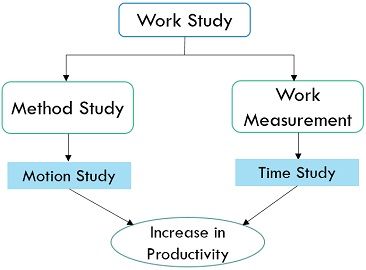 Time study is all about determining the ideal time taken in the performance of a well-defined job. On the other hand, Motion study is the analysis of human work, to find out the best method of doing it which involves least efforts.

Work-Study covers all those techniques, method study and work measurement, which analyzes and assesses human work, in all aspects. It is a means of improving the productivity of the company wherein non-value adding operations are eliminated by carefully observing them.

Time study can be understood as the systematic process of deeply analysing and evaluating human work with the help of a time-measuring device, so as to find out the ideal time needed for finishing each element of the industrial activity.

It aims at fixing a standard time for a competent worker, to effectively complete the task assigned under specific circumstances at a fixed level of performance. And to do so, a stopwatch or other time device is used to measure the time consumed.

Thereafter, the standard time for the entire task is determined by taking multiple readings, in which the task should be finished. For this purpose, a well-qualified and experienced practitioner is required who watches and observes the work, note down the readings and concurrently analyses the speed of work.

Volume and frequency of the task, cycle time of operation and time measurement cost acts as a basis in this study. It aims at identifying the number of workers to be employed to undertake the task or activity. As well as the study is helpful in implementing the appropriate incentives scheme. It is important for the planning and controlling of operations.

This concept is introduced by FW Taylor and his associate Frank Gailberth. Motion Study as the name itself indicates is the critical observation of the movements of the workers such as lifting, picking, placing objects, sitting and changing positions, which are carried out in the course of doing a task.

It aims at selecting the best method/technique of carrying out any activity which involves the least movement and which helps in minimizing the efforts. It identifies motions which are productive, unproductive and incidental.

For this purpose, the existing or proposed ways of performing the task are recorded and analyzed carefully, in order to develop and implement an easier and effective method, which ultimately results in a reduction of cost. This is because the reduction in movement is concerned with the elimination of the unnecessary and unproductive movements, so as to take as less time as possible, in the completion of the job efficiently.

The primary goal of this study is the improvement in performance both in terms of quality and quantity of output, by analysing the body posture, body movements and hand movements.

The points given below are substantial so far as the difference between time and motion study is concerned:

Time and motion study is conducted to evaluate the industrial performance, by observing the time taken during various motions of a task or activity. These studies are tried and tested, and so they are reliable. It helps in the reduction and controlling costs, improving working conditions and implementing a suitable incentive scheme for the workers.

When it comes to suitability, time study is not suitable for workers where the jobs are of specialised nature as well as quality is the main consideration. But, there is no such limitation in the case of motion study as it is suitable for all types of job.

Difference Between On-the-job and Off-the-job training