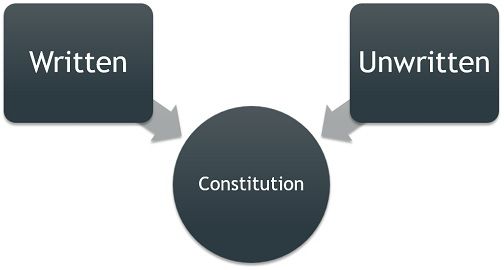 Constitution refers to a system of laws and principles which acts as a base for the governance and control of a nation. It determines the distribution and control of powers, organization and function of the government, primary organs of the state as well as the rights and duties of the citizens. Further, only those powers are used by the government which has been granted by the constitution.

A constitution is a live document, in which necessary amendments are made according to time and society. It is classified as per the political system prevalent in the country. One such classification is written and unwritten constitution.

Written Constitution, as the term itself clarifies, is that type of constitution wherein there is a legal and formal book or series of documents bound as a book containing the nature of the constitutional arrangement, the laws governing the entire system and the rights and duties of the citizens and the government.

It explicitly lays down the primary organs and bodies of the government.

Written Constitution is perfectly framed, duly passed and enacted after deep analysis and consideration, concerning the situation and conditions of the country. For the purpose of its enactment, a specialized body is assigned, who formulate and adopt the constitution.

In a written constitution all the laws are present in writing, and so people can refer to it whenever needed. Further, powers, functions, organization of the different bodies are specified, which does not leave a room for confusion and chaos.

Unwritten Constitution refers to a constitution wherein the fundamental laws, legal decisions and rules that govern the nation are not embodied in a single written document systematically.

However, they are defined by customs, usage, precedents, formal and legal enactments and instruments such as certificates, bonds, deeds, contracts, acts, writ, process, will, etc. as manifested in statutes and decisions taken by judiciary. The laws evolve through continuous use and practice, which become a part of the constitution.

In better words, the unwritten constitution is the constitution which is neither drafted nor enacted with a proper procedure by the constituent assembly. And so, it does not mean nothing is written, rather it means that it is not codified in a single legal document or book. Further, there is no specialized body assigned to enact of the constitution.

One can understand the provisions relating to the constitution with the help of reading explanation given by the judiciary, committees or experts. The information about it can be obtained from historical charters, principles, laws etc. The government is systematized and it works as per the well established and predefined rules. Further, all the citizens of the country follow these rules.

The difference between written and unwritten constitution are discussed hereunder:

In a written constitution, all the provisions are present in writing and are laid down with great consideration and so it cannot be twisted and modified as per the conditions and emotions, which ensures consistency in decisions. Conversely, in an unwritten constitution, it is easy to add a new law or update the existing one.

Difference Between Interpretation and Construction