Democracy is based on the notion that – the source of all political power is people, i.e. citizens of the country. An ideal democracy is one where due respect is given to all the groups and views which are prevalent in society.

And that is why it is believed that political power should be distributed among the maximum possible citizens. Therefore, the concept of power-sharing emerged.

What is Power Sharing?

Power-sharing is an arrangement wherein powers and responsibilities are divided among different organs, levels and social groups. It can take many forms. Of which two most popular forms are – Horizontal Power Sharing and Vertical Power Sharing.

In a democratic government, power is divided among different bodies, i.e. legislative, executive and judiciary, wherein legislative body makes laws, executive body implements or enforces them, while it is the judiciary who interprets them.

Such a division of power is called horizontal power-sharing, in which the different government organs are placed at the same rank/position to exercise their power. So, a demarcation is maintained between the organs, which ensures that no government body exercise the absolute power.

In this manner, checks and balances of power are maintained, as each organ checks the other, resulting in the balance of power among various bodies.

In vertical power-sharing, the power is shared among the government working at different levels, i.e. the higher and lower levels. The constitution explicitly describes the powers of each level of government and the lower organ works under the higher one. This is known as the Federal Division of Power.

In this power-sharing arrangement, there is a common government for the whole country and government at the provincial and regional level. 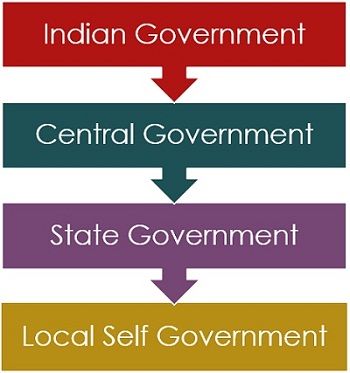 In India, the common government is called the Central Government, while the government working at the provincial and regional level is the State government and Local Self government respectively.

So, there are a number of matters of issues on which the Union government has the exclusive power to make decisions, while there are some matters on which the power is assigned to the State government to take a decision on a matter, which concerns their State.

In general, the Central government looks after the development of the entire country, while it is the responsibility of the State Government to develop the State.

The points given below are noteworthy, so far as the difference between horizontal and vertical power-sharing is concerned:

Initially, there is an undivided political power because it is believed that if power is distributed then decision making will be delayed. But, with the introduction of democracy, such beliefs are changed.

The power-sharing arrangements give more power to the general public, from choosing their representatives to having a voice in deciding the public policies.

Difference Between Horizontal and Vertical Analysis

Difference Between Written and Unwritten Constitution