On the other hand, construction is used to ascertain the legal effect of the legal text. The two terms are used interchangeably, but there exists a fine line of difference between interpretation and construction in their connotations. So, check out this article in which we’ve simplified it for you. 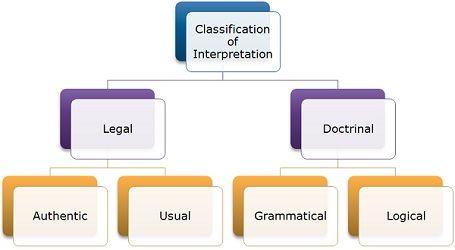 The process of enactment of the law and its interpretation takes place at different points of time and performed by two different government bodies. The interpretation of an act creates an understanding between these two and bridges the gap.

In law, ‘construction’ means the process of legal exposition which determines the sense and explanation of abstruse terms, writings etc. in the statute and draws a conclusion on the basis of logical reasoning, with respect to the subject that lies above the direct expression of the legal text.

The basic principle of construction of a statute is to read it in a literal manner, meaning that by elucidating the words used in the statute, ordinarily and grammatically, if it results in ambiguity and is likely to convey another meaning then the court can opt for its literal meaning. However, if no such absurdity is possible, the fundamental rules of interpretation can be adopted.

Key Differences Between Interpretation and Construction

The difference between interpretation and construction can be drawn clearly on the following grounds:

Difference Between Unicameral and Bicameral Legislature

Difference Between Summary and Paraphrase