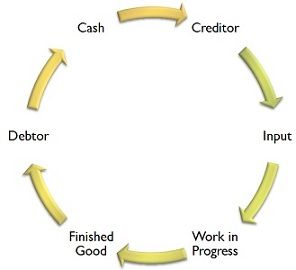 The two major elements of working capital of a company are current assets and current liabilities. The assets which are readily converted into cash are considered as Current Assets while Current liabilities are those debts which fall due for payment within a short duration. Account receivable is a current asset account, which represents the money to be received by the company, against the goods delivered or services rendered to the customers.

On the other hand, accounts payable is a current liability account, indicating the money owed by the company to the suppliers, and appeas as a liability in the company’s Balance Sheet. Many accounting students get confused amidst these two terms, but there is a fine line of difference between account receivable and account payable.

Accounts Receivable refers to the amount to be received by the entity in the future specified date for selling goods to the customers on credit. It reflects the money owed by the customers towards the company. It appears on the assets side of the Balance Sheet, under the head current assets. Bills Receivables and Debtors constitute the Account Receivables.

Every company sells goods on credit to other entities, to have better customer relations, holding an advantageous position in the market and increasing turnover as well. Although all the debtors do not prove to be good, default in payment is also made by some debtors which lead to Bad Debts. Due to this reason, a provision is always created by the company to cope up with the bad debts. The provision is known as Provision for Doubtful Debts. Few points are considered before allowing goods on credit to any customer. They are:

A short-term obligation, need to be discharged in the future, arising out of the purchase of goods or services received or expenses made is known as Accounts Payable. It includes trade payable i.e. bills payable and creditors, and expenses payable like an advertisement expense, electricity expense or expenses on supplies, etc. It represents the money owed by the company towards suppliers and creditors. Accounts Payable appears on the liabilities side of the Balance Sheet, under the head current liabilities.

It is quite natural that the entities on credit buy goods. They are one of the major sources of finance for the company which arises very often, in the normal course of business. It is the duty of the company to pay the creditors in time because slow payment of debts will hamper the whole supply cycle, which in turn spoil the working capital cycle of the company. This will also have an ill effect on the reputation of the company.

This should be kept in mind that the company should effectively utilize the credit period, allowed by the creditors. Moreover, they must use bills of exchange to pay the debt in place of cheques.

The significant differences between accounts receivable and accounts payable are explained below:

Difference Between Balance Sheet of a Company and a Bank

Difference Between Assets and Liabilities