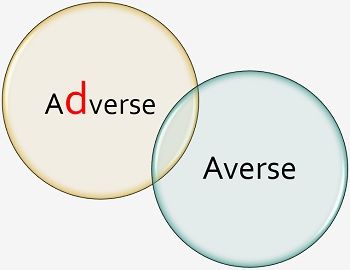 The words adverse and averse are derived from a Latin term, which is one of the frequently confused pairs of homonym. However, their meanings are quite different, in the sense that adverse is used to point out something which is unfavourable, conflicting, detrimental or unfriendly.

On the other hand, averse is used to denote something which is unwilling, reluctant, loath or opposing by nature. Let’s understand the two with the help of the examples given below:

In these two examples, you might have noticed that adverse is used to denote harmful, whereas averse primarily indicates a strong feeling of disagreement.

The word ‘adverse’ indicates conditions, circumstances or anything else, that has a harmful or negative impact or poses a threat on a person or thing. We use ‘adverse’ for something which is contrary to or opposed to one’s interest, development or welfare.

Key Differences Between Adverse and Averse

The difference between adverse and averse can be drawn clearly on the following basis:

To sum up, you can use adverse when there is a negative or unfavourable reaction or something that acts in opposition, whereas averse is used when you dislike, disagree or avoid something. The basic difference between the two lies in their meaning, i.e. while you can remember adverse with the bad, averse can be memorized with the inverse, which means opposed to something.

Difference Between Risk and Hazard

Difference Between Sympathy and Empathy