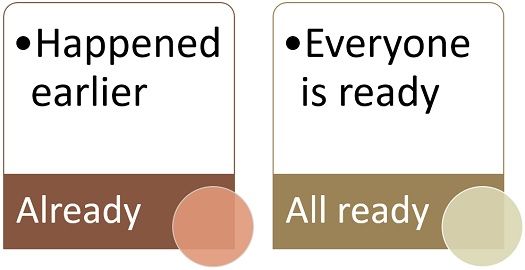 ‘Already and All ready’ often confuses us because of their similar pronunciation, however, if you analyse deeply, they are two different words. ‘Already‘ is used in the context of an event which is happened previously. On the other hand, ‘all ready‘ means fully prepared for something.

When we use already in our sentence, we put stress on an event that took place sooner than expected. It is commonly used with past perfect or present perfect tense.

Further, it is used in affirmative and interrogative sentences only and not in negative ones. It is normally positioned at the middle of the sentence, i.e. between the subject and the main verb but after the auxiliary verb. Now, we’ll discuss its usage:

Definition of All ready

‘All ready’ is a two-word term, wherein all is a pronoun/determiner which means ‘whole or entire’ and ready is an adjective which means ‘in such a state to perform an action instantly’. So, the combination of these two words implies ‘totally ready, apt or prepared for doing something’.

Further, ‘all ready’ may also be used when you fully agree with someone regarding something or when everything/everyone in the group is ready or available.

Key Differences Between Already and All ready

The points given below are noteworthy, so far as the difference between already and all ready is concerned:

The basic difference between these two lies in their meanings, i.e. when something takes place before expected time, we use already. Conversely, all ready is used when everything or everyone is set, prepared of available to do something. Further, if you can replace the word with ‘ready’ use all ready, but if you can’t then use already.