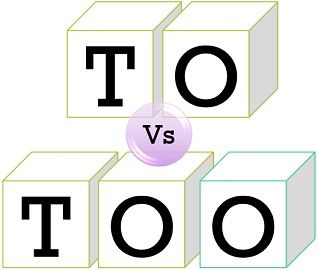 The words ‘to’ and ‘too’ are homonyms, that have similar pronunciation but differ in their meanings, spelling and origin. While the word to is used in sentences to denote direction. On the other hand, the word too is used to indicate something of high degree, also or very. Now let’s take a look at the examples to understand how they differ:

The function word ‘to’ is a preposition which means ‘in the direction of’. It is commonly applied in sentences to express a purpose, show direction towards a particular point or location, i.e. destination. It can be used in sentences in the following ways:

‘Too’ is an adverb which means overly or excessively. It is used when one wants to express something of high degree or intensity than needed or wanted. Let’s understand the use of too, with the help of points given below:

Key Differences Between To and Too

The difference between to and too can be drawn clearly on the following grounds:

The best way to remember the difference between to and too is that while to has only one ‘o’ too has more than one ‘o’, i.e. many ‘o’s’. So, you can use too wherever you want to indicate more than enough, in excess, also, very etc., otherwise, you can use to.

Difference Between Farther and Further