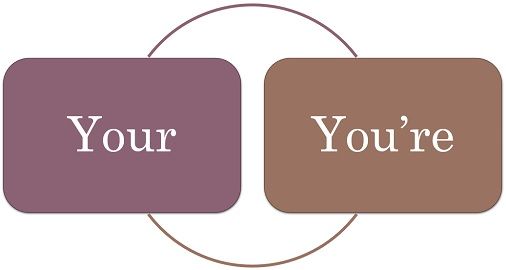 The words your and you’re is common in terms of their pronunciation but differ in their meaning and usage. While there are many of us, who use them interchangeably, due to lack of knowledge in this regard. We use your when we want to express belongingness of the other person to the conversation, to something.

On the contrary, you’re is a contraction, for the term ‘you are’, which is used informally in the sentences. Now, let’s look at these examples to understand them better.

In these two sentences, you’re is used when the speaker refers to another person. On the other hand, your is used to show possession of the other person over the object.

The word ‘your’ is a possessive adjective (second person) which highlights possession or ownership, of another person on something. In other words, your is used to express belongingness to you. We use the word ‘your’ with a noun both singular and plural. It can be used in the following ways:

The word ‘you’re’, is an acronym used commonly for the term ‘you are’, in the informal sense. It is usually followed by an adjective to tell a description or by a present participle, i.e. a verb ending with -ing, to show some action. Let’s look at the examples to understand the use of you’re in sentences:

Key Differences Between Your and You’re

The difference between your and you’re are discussed in the points given below:

Your is just the possessive form of the word ‘you’. We can use it for the second person, as we use his and her, for the third person. Further, you can use ‘you’re’ when you can expand it to you are in a sentence or else your has to be used.