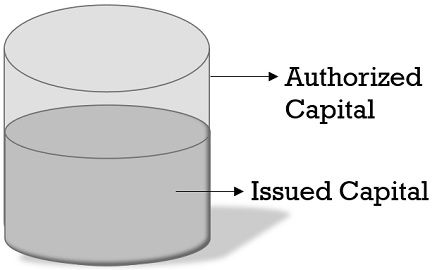 A company is an artificial person whose management is done as per its constitution which we know as Memorandum of Association (MoA). So, the company’s MoA defines everything including the maximum amount that the company can raise from the general public by the issuance of shares. That upper limit stated with regard to the share capital is called Authorized capital.

Authorized Capital refers to the share capital with which a joint-stock company is registered On the other hand, the issued capital is the share capital actually offered for sale by the company to the general public.

As we know that the capital of a joint-stock company is divided into small units which are known as shares. And each share carries a face value. Share Capital refers to the capital which a company raises by issuing shares at the given face value.

In simple words, the amount contributed by the shareholders by subscribing to the company’s shares towards the face value is collectively known as Share Capital. It represents the total nominal value of shares issued by the company.

This post talks about the difference between authorized capital and issued capital.

Authorized Capital refers to the amount of share capital, which the company registers itself with the registrar of companies, and is authorized to issue by its Memorandum of Association. This means that it is the maximum amount of capital that the company, through its MoA takes power to issue during its lifetime.

A statement of authorized capital needs to be made on the statutory form as well as it should be registered with the Registrar of Companies. This capital is divided into shares whose denominational value is determined by the company’s promoters. This capital is not issued in full.

Authorized capital is not completely issued by the company so that additional capital can be raised in the future, at different stages based on the need and demand. Also, a portion of shares is kept in the company’s treasury to preserve the controlling interest.

Issued Capital implies the nominal value of that portion of authorized capital which is subscribed by the signatories to the memorandum of association and allotted for cash or for consideration other than cash, and allotted as bonus shares. It is the capital that a company issues from time to time for subscription.

Basically, a company does not issue its entire authorized share capital to the general public, i.e. only a part of it is offered for subscription and allotment to investors. Therefore, that portion of the company’s authorized capital which is actually issued, to the general public for subscription is called issued capital. It represents the nominal value of share capital issued to members

Here, it must be noted that it is not necessary to issue the entire authorized capital in one go. Therefore, the company can raise additional capital whenever there is a need for additional funding.

What is included in issued capital?

It includes shares allotted to the:

What is not included in issued capital?

As we have understood the meaning of the two types of share capital in detail, now we will understand the difference between authorized capital and issued capital:

Below are some cases given for which you need to calculate authorized capital and issued capital: