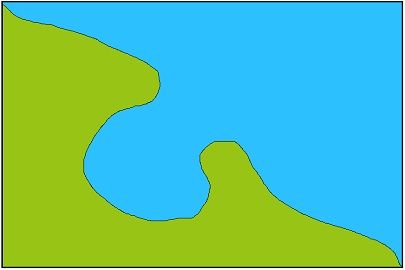 As both bay and gulf are the places where land meets water. They are the water bodies connected to the sea, formed by the erosion of coastline. In spite of many similarities, it is important to note that they are different, in the sense that bay has a wider opening than the gulf. Further, it is also said that the gulfs are larger and more deeply indented as compared to the bay.

Bay is a part of the coast, having an inward land curve, in such a way that the sea is enclosed by land on three sides. Contrary to this, gulf represents a large and deep coastal indentation, such that land surrounds the sea from the maximum part, leaving one narrow opening. Read this article to understand the difference between gulf and bay.

Bay can be described as a recessed waterbody, partially enclosed by the land and directly connected to the large waterbody such as lake, river, sea or ocean. These are formed by many ways, such as by plate tectonics process in which the continents drift together and rift apart, or by erosion of coastline to the ocean. It may also be formed when the oceans overflow the coastline.

Bays that are open to the oceans consist of marine habitats, whereas bays opening to the rivers or lakes have freshwater and thus a home to many reptiles. They are a good place for fishing and also help in sea trade. The Bay of Bengal, situated near India, is the world’s largest bay.

Gulf means a body of water, whose maximum part is surrounded by the land and has a small narrow opening. The formation of gulf takes place, by the movement in the earth crust, i.e. the tectonic plates may rift to form a gulf. It is also called as that part of the ocean which penetrates land.

The Gulf is also called as a large bay, which is deeply recessed. These are deep, and large water bodies that are often used as ports or harbours wherein loading and unloading of people and cargo is done through boats.

The Gulf of Mexico is regarded as the largest gulf, across the world.

Key Differences Between Bay and Gulf

The difference between gulf and bay can be drawn clearly on the following grounds:

Both bay and gulf are concavities, which are created when tidal erosion takes place at the shoreline of the sea. When it comes to size, gulfs are said to be larger than the bays; however, the world’s largest bay, i.e. the Bay of Bengal, is greater than the world’s largest gulf, i.e. the Gulf of Mexico. Therefore, the two waterbodies significantly differ in their indentation and enclosure.

Difference Between Port and Harbour

Difference Between Himalayan and Peninsular Rivers