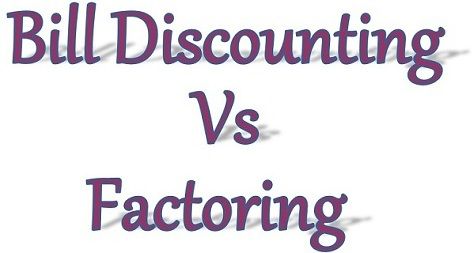 Bill Discounting and Factoring are two types of short-term finance through which the financial requirements of a company can be fulfilled quickly. The former is related to the borrowing from the commercial bank while the latter is associated with the management of book debts.

So, there exist a fine line of differences between bill discounting and factoring, which are explained in the article provided below.

Bill Discounting is a process of trading or selling the bill of exchange to the bank or financial institution before it gets matured, at a price which is less than its par value. The discount on the bill of exchange will be based on the remaining time for its maturity and the risk involved in it.

First of all the bank satisfies himself regarding the credibility of the drawer, before advancing money. Having satisfied with the creditworthiness of the drawer, the bank will grant money after deducting the discounting charges or interest. When the bank purchases the bill for the customer, it becomes the owner of the respective bills. If the customer delays the payment, then he has to pay interest as per prescribed rates.

Further, if the customer defaults payment of the bills, then the borrower shall be liable for the same as well as the bank can exercise pawnee’s rights over the goods supplied to the customer by the borrower.

Factoring is a transaction in which the client or borrower sells its book debts to the factor (financial institution) at a discount. Having purchased the receivables the factor finances, money to them after deducting the following:

Now, the client forwards the collection from the customer to the financial institution or he gives the instruction to forward the payment directly to the factor and settles the balance dues. The bank provides the following services to the client: Credit Investigation, Debtors Ledger Maintenance, Collection of Debts, Credit Reports on Debtors and so on.

The types of factoring are as under:

The following are the major differences between bill discounting and factoring:

In bill discounting, bills are traded while in the case of factoring accounts receivable are sold. There is a big difference between these two topics. In bill discounting the bank provides a particular service of financing, but if we talk about factoring additional services are also provided by the financier.

Difference Between Factoring and Forfaiting

Difference Between Cheque and Bill of Exchange