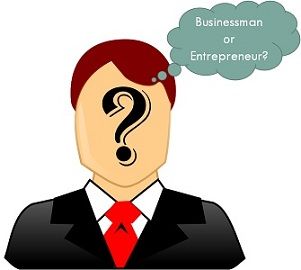 A businessman walks on the defined path, but an entrepreneur believes in making his own path, which becomes a guideline for other businessmen. Most of the people have a misconception that the terms businessman and entrepreneur, carry the same meaning, due to which they use them interchangeably.

A businessman is a person who runs the business, undertaking an unoriginal business idea.  On the contrary, an entrepreneur is someone who first initiates a product or business idea and thus the leader of that in the market.

A person who is engaged in carrying out any activity, related to commercial and industrial purposes is known as Businessman. He sets up his business as a new entrant in the market as for the existing business. When it comes to originality of ideas, most of the businessmen go for a business which is highly in demand or which can make huge profits for them irrespective of uniqueness.

A businessman faces tough competition because there are hundreds of rivals already existing in the market undertaking the same business. Although the risk factor is low because he walks on a path that is already tested by the rivals so the chances of failure are relatively low.

The main objective of a businessman for conducting the economic activities is to generate revenue by employing the human, financial and intellectual resources. By virtue of this, customers are treated as the king of business by the businessman.

An entrepreneur is a person who conceives a unique idea or concept to start an enterprise and brings it into reality. He is the person who bears risks and uncertainties of the business. The venture established by the entrepreneur is known as Startup Company, which is formed for the very first time regarding the idea, innovation or business process.

He/She is the ones who lead the market always no matter how many competitors will come later, but their position will remain untouched.

In economics, the entrepreneur is considered as the most important factor of production, which assembles and mobilizes the other three factors of production i.e. land, labor and capital. In the long run, these entrepreneurs become a businessman.

Entrepreneurs are known for their creative approach. They introduce innovation and coordinate the resources. They offer such products and services which bring about a change in the world.

Key Differences Between Businessman and Entrepreneur

The following are the differences between businessman and entrepreneur

A businessman is a businessman, but an entrepreneur is an entrepreneur, an organizer, a risk taker, a manager at the same time. The former focuses on competition, but the latter gives emphasis on coordination and cooperation of all the resources.

Difference Between Entrepreneur and Intrapreneur

Difference Between Invention and Innovation