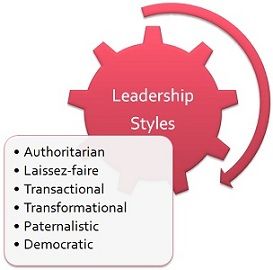 Leadership is a trait of influencing the behavior of individuals, in order to fulfill organizational objectives. A number of leadership theories have been propounded by various management experts considering behaviour, traits, nature, etc. namely, Authoritarian, Laissez-faire, Transactional, Transformational, Paternalistic and Democratic. Transactional Leadership or otherwise known as management leadership, refers, to a leadership style which lays emphasis on the transaction between leader and its subordinates.

Many people have trouble understanding the difference between transactional and transaformational leadership.

A leadership style whereby the objectives and goals are predefined and the leader uses reward and punishment to motivate his followers is known as Transactional Leadership. It focuses on improving the current situation of the organisation by framing the steps and controlling the organisational activities. The basic purpose of this type of leadership is to revamp the existing corporate culture and to enhance current policies & procedures.

In 1947, the style was first proposed by Max Weber followed by Bernard Bass in the year 1981.

In this leadership style, the leader uses his authority and responsibility as his power as well as the style has a formal approach. Prize and penalties are the two primary tools employed by the leader to inspire his subordinates i.e. if an employee achieves the target within the stipulated time he is given initiative for his work, whereas if the task is not completed within the required time, then he will be penalised for the same.

The style of leadership in which the leader uses his influencing power and enthusiasm to motivate his followers to work for the benefit of the organisation. Here, the leader seeks the requirement for a change in the existing organisation culture, gives a vision to his subordinates, incorporates mission and implement the change with the dedication of his followers.

In transformational leadership, the leader acts as a role model and as a motivator too who offers vision, excitement, encouragement, morale and satisfaction to the followers. The leader inspires his people to increase their abilities and capabilities, build up self-confidence and promotes innovation in the whole organisation.

The following are the major differences between transactional and transformational leadership:

If you are searching for the best leadership style between transactional and transformational leadership, then you will end up saying that both are having its merits and demerits. It depends on the situation which leadership style will be most appropriate to it.

Difference Between HRM and SHRM